not a retreat. an advance.

A couple of months ago, John decided he wanted to take me to Hume Lake on a homemade little marriage retreat for a weekend.

My first thought was "oh yay! Hume!" Followed by, "I've never been away from the boys for that long! How will Twain and Ollie survive???"

When John and I were dating in college, he literally sent me to Hume that first summer we were together. He wanted me to experience one of his favorite places on earth. He was supposed to stay back in the city working, while I was at Hume. But after a few weeks, he followed me on up to Hume. He claims he missed Hume. Yah, sure;)

He was a fancy camp counselor.

I was a midnight toilet plunger.

The likes of the two aren't supposed to mix.

Us toilet plungers were a little scorned--but we were a proud crew of misfits and even wore matching tees, donning a cartoon character rappelling into a toilet with a clothespin on nose, with the caption saying "It's not a job. It's a nightmare".

I actually plunged over 200 toilets that summer, a feat that was quite daunting for someone of my constitution. I think before Hume, I had never even touched a plunger without retching. I think God gave me this job to prepare me for the rigors of 4 boys. I mean, cleaning their bathroom is not a job, but a nightmare.

However. Toilets and poop aside, that summer was very romantic and we had the time of our lives. So I was excited to go back to one of our favorite places together for our homemade marriage retreat.

Except we weren't calling it a 'retreat'. John read somewhere it should be called a marriage 'advance' because we were going forward rather than backwards. 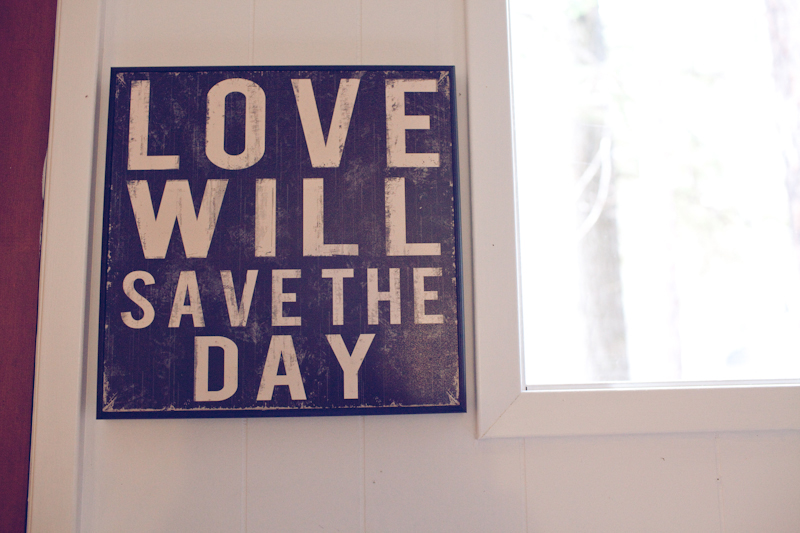 John was in charge of this whole thing. He decided our itinerary. He is always reading books on marriage and such. He is good at this kind of stuff, whereas I am totally awkward and silly. I can barely keep a straight face typing the word 'marriage' here on this blog.

The night before our trip, I went to Target for some last minute supplies. I was gone 20 minutes. When I returned, Twain informed me, "I missed you while you were at Tardet(Target)".

Oh mercy. I was gone 20 minutes and Tweeds was already missing me? I was sad but knew that the best gift I could ever give to Twain was a good marriage. John deserved a weekend away. It would be good for us.

Still I was a bit 'noivous' leaving Twain behind. I'm slightly pathetic, let's just get that out in the open.

On our drive up, I just felt in my heart that I had to have a warm chocolate chip cookie from McDonalds or I would die. We walked in and I asked for my chocolate chip cookie. But they only had stale oatmeal cookies left. My face fell. The girl behind the register just stared at me.

We then went on a wild goose chase for another McDonalds but couldn't find one. Aren't they supposed to be everywhere? We finally settled for dessert at Burger King, which was a big mistake. The stale cinnabon twisted and churned in my stomach, as we went round and round the mountain up to Hume.

On our way up, John turned on the podcast and we listened to our first online seminar from a speaker on love languages. It was actually pretty funny.

Here's my thoughts on love languages. I don't expect anyone to learn my love language. It's a nice bonus if they do, but certainly not mandatory. But I do think it's neat to go out of your way to learn someone else's. For example, the speaker talked about the time he went off to college and an older  couple from church invited him to dinner with a few other students. Around the dinner table that night, the wife asked each kid what their favorite food was...and lo and behold...she had it served for dinner that night. Each kid asked "How did you know that was my favorite food?" and she answered "I called and asked your mama."

"You called and asked my mama?" they sniffed tearfully. I want to do that one day.

The next morning as I was getting ready in the bathroom, John turned on my favorite soundtrack. 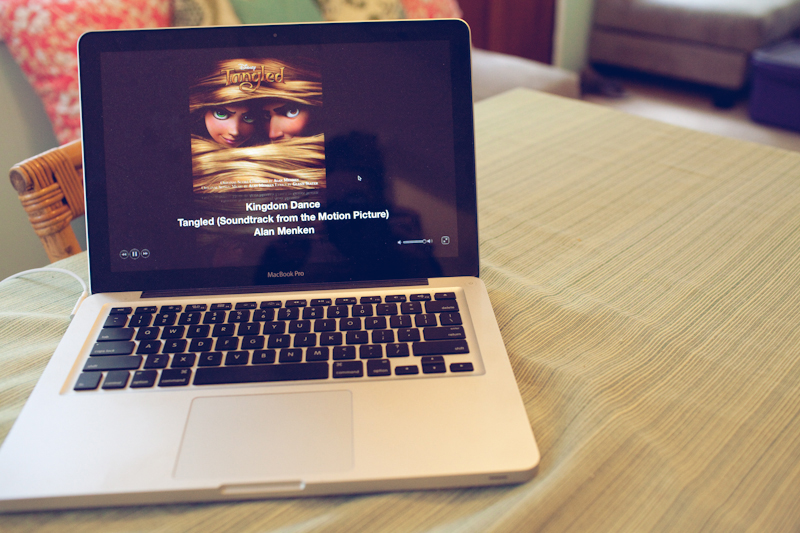 I was so happy!

And he said that for our first activity together for the morning, we could make chocolate chip cookies together. Sweet. 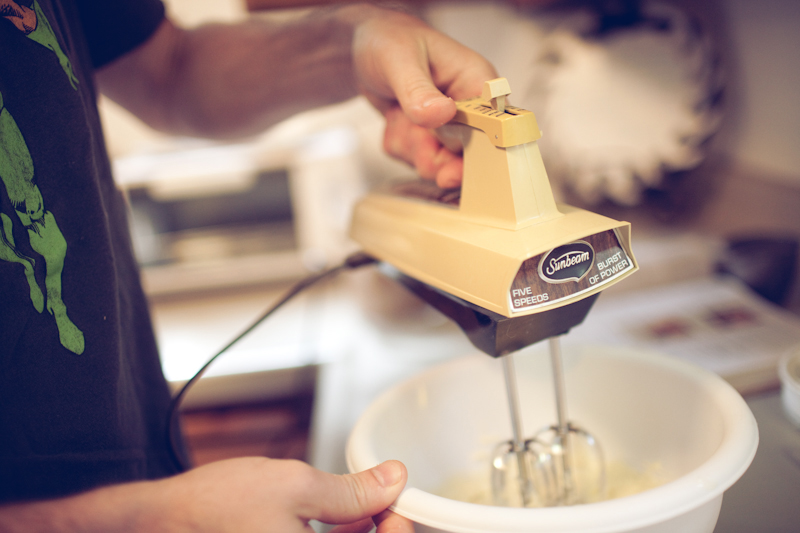 We were staying in John's brother's rental cabin, formally owned by their grandparents. I think this retro beater belonged to his Grandma.

My job was to mix in the chocolate chips. 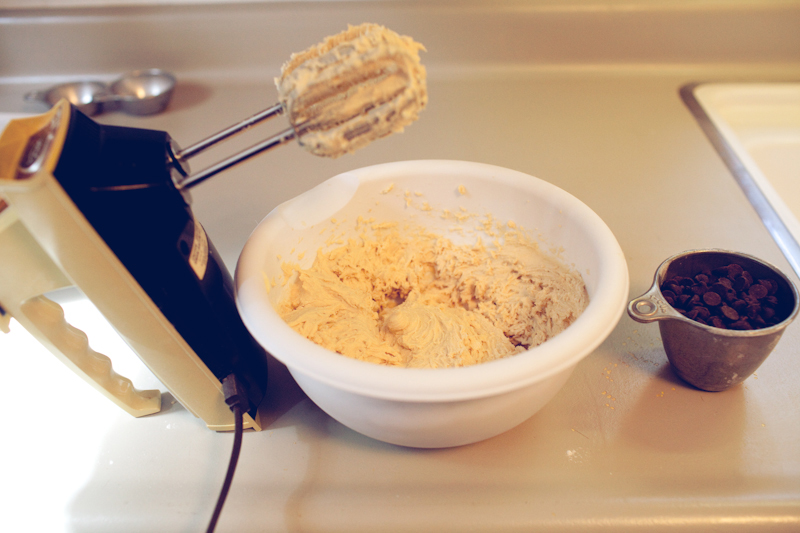 Stoked it was cool enough to wear my favorite wool hoodie. 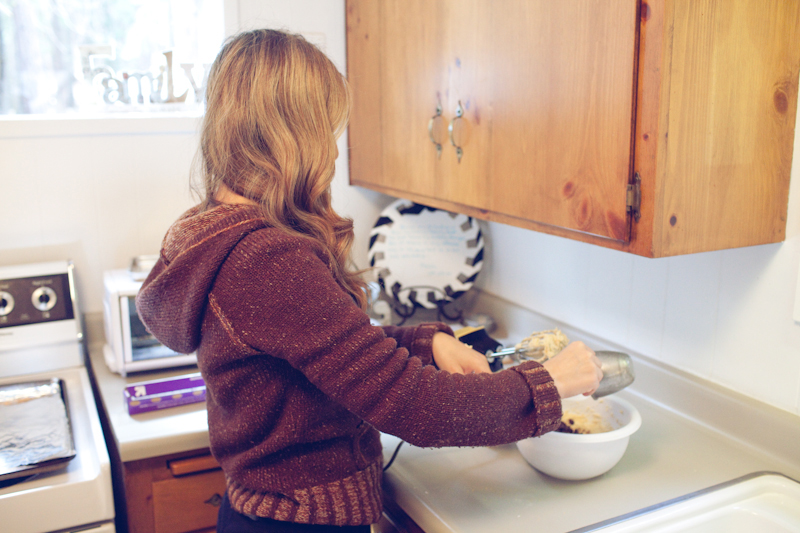 John's Grandpa made these cabinets. They look swedish and I want them. 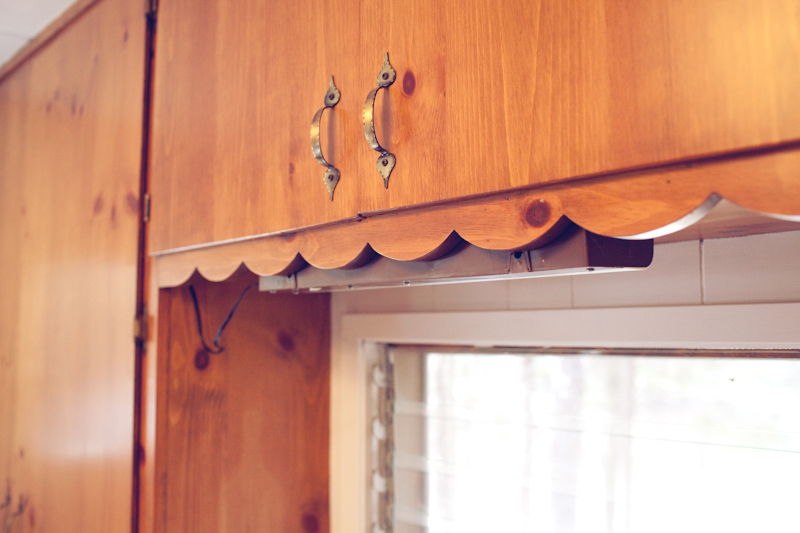 And my other job was official taste-tester. Obvi. 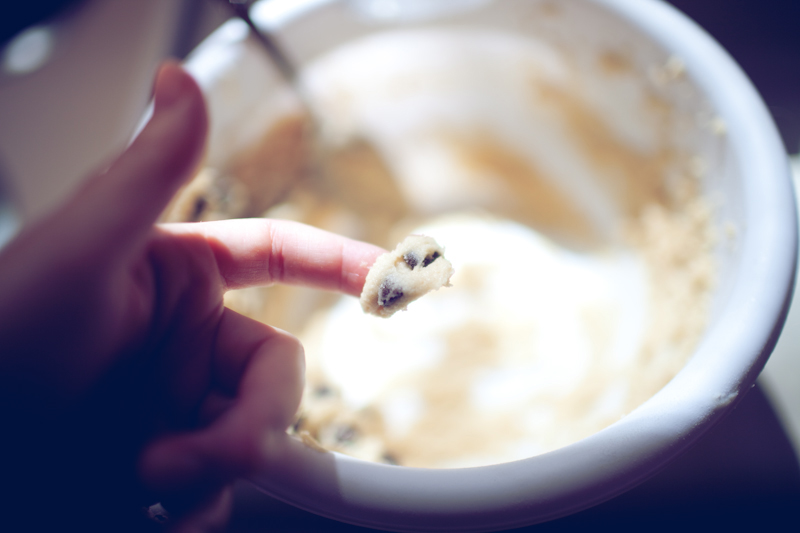 We did not have crisco shortening(key ingredient) and used butter instead. As a result, the cookies were very yucky. Our first marriage-builder activity did not fare too well. 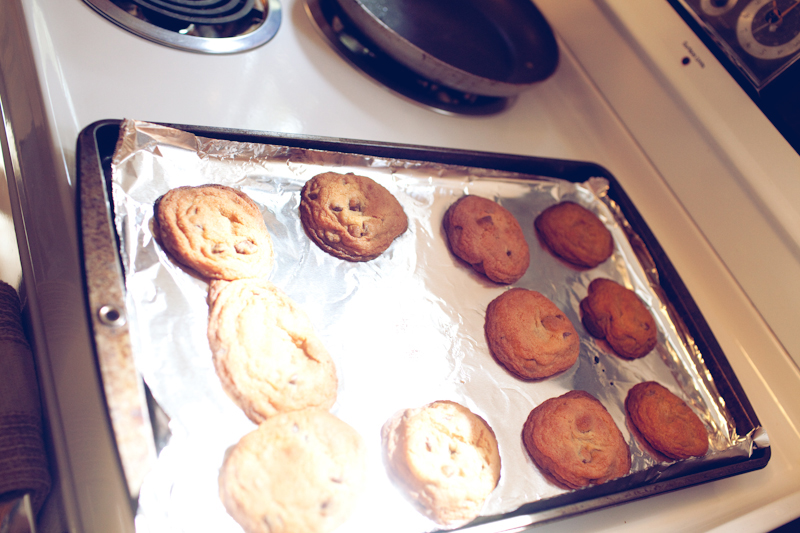 We then listened to another speaker via podcast. This time the topic was on honesty in marriage and how it brings you closer together. Once again, I survived the session. Actually I rather enjoyed it.

James 5:16a Therefore confess your sins to each other and pray for each other so that you may be healed.

I can attest to the truth in this verse. We all mess up. We are all humans. Even Christians. John and I are not perfect. We are no exception. We need to fess up with the best of them, from time to time.

Onward ho, to marriage builder number 2: Riding on the quad to get to the lake. I never rode on a quad before. This shall be interesting. Like the time we tried riding the tandem bike at Hume. Talk about a good marriage builder.

John drove recklessly down the hill while I screamed and held on for dear life. At the bottom, we switched places. My turn. 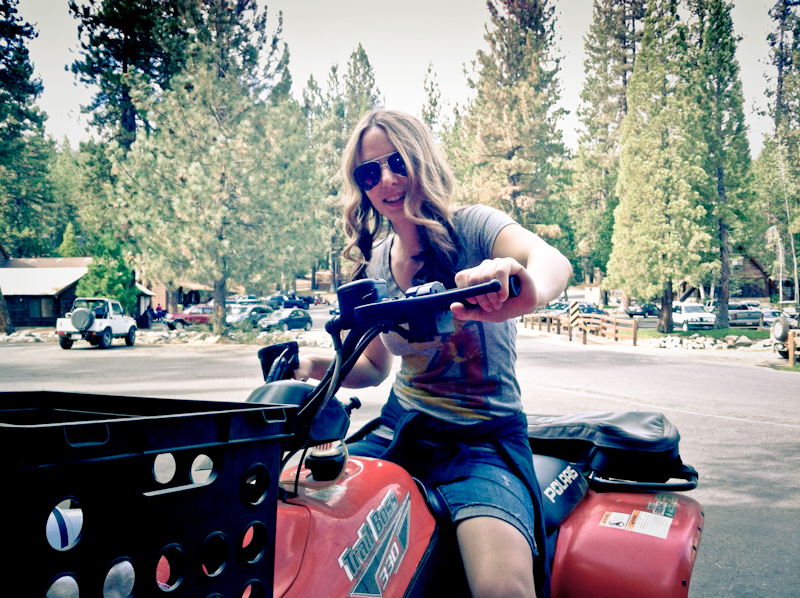 I drove along at the pace of a snail and John busted out his iPhone to document our wild ride. 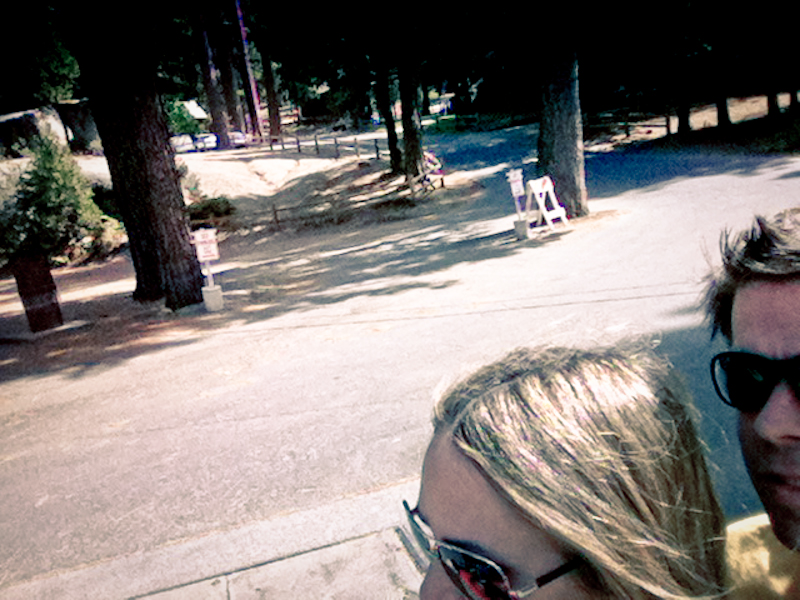 I must say, a girl could get used to 4 wheeling. I finally got up to the speed limit, and off we went.

Next on the agenda was a brisk nature walk around the Lake, to burn off those cookies. 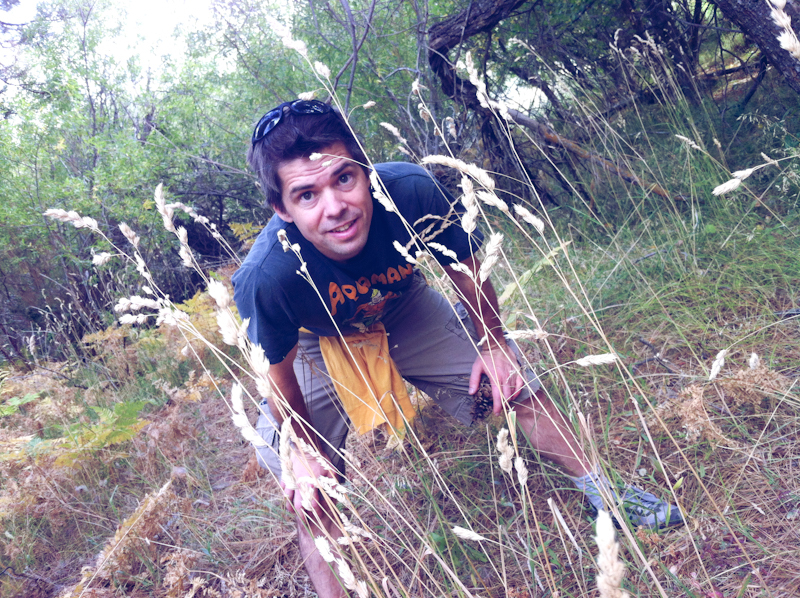 My attempt to look romantic. 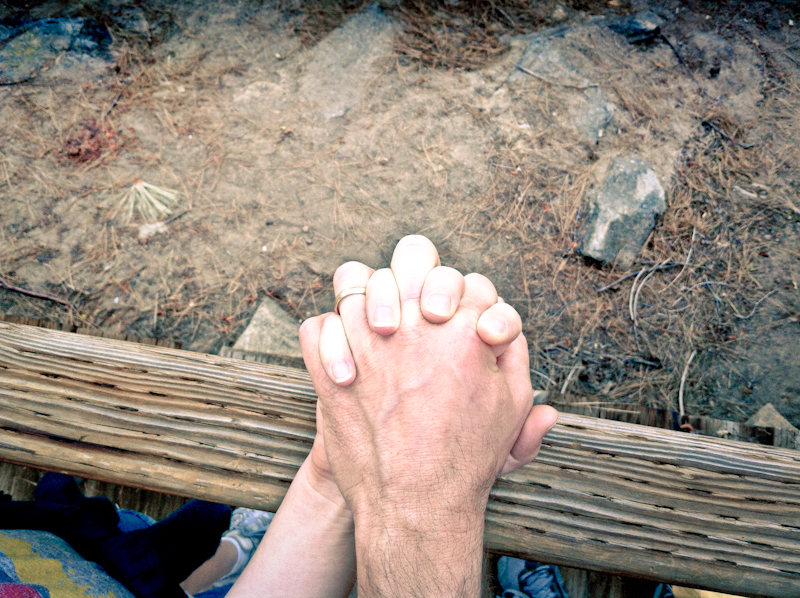 Instead I look like I'm squeezing the daylights out of John's hand.

I'll stick to what I know best. Playing in the weeds. 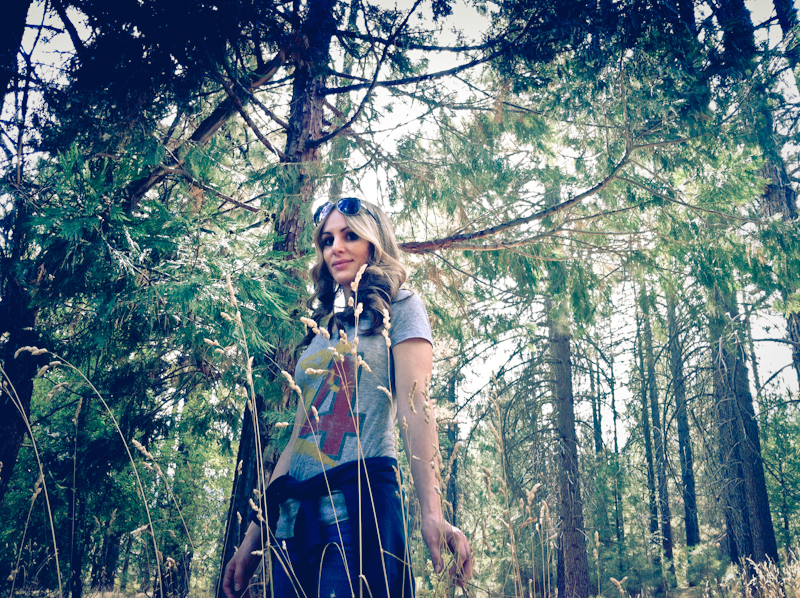 The weather was beautiful. I'm convinced September is the best month to visit Hume. The crowds of hyper kids were gone, replaced by mellow campers scattered about. The sun came out during the day, but it wasn't hot. It was cool at night, but not unbearably so.

We had lunch back at the cabin and then John said I could have some free-time. He's kinda strict, LOL.

I worked on my 1 John Precepts study, so I wouldn't fall behind. I was marking my key words like a  wild mashaguna. 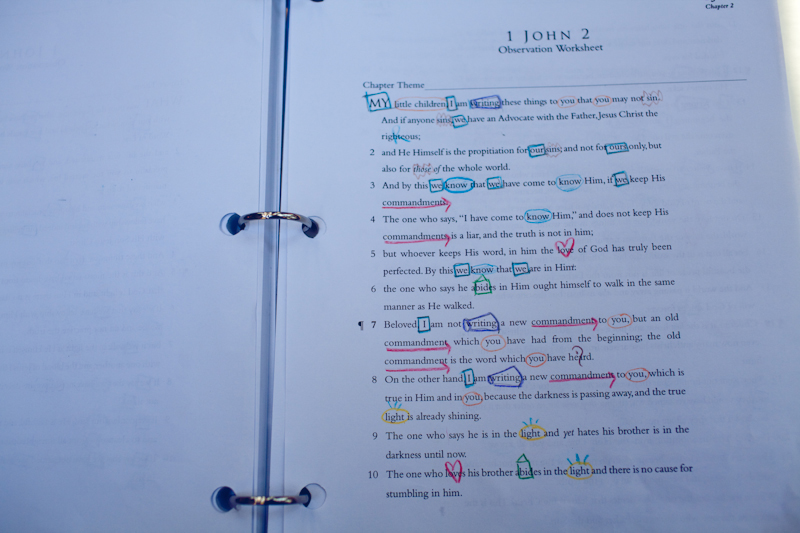 My last Precepts study, I was too cool for colored pencils. This time I have completely embraced the colored pencils. My fearless leader Claudia, will be proud. I feel like I'm in the club now. 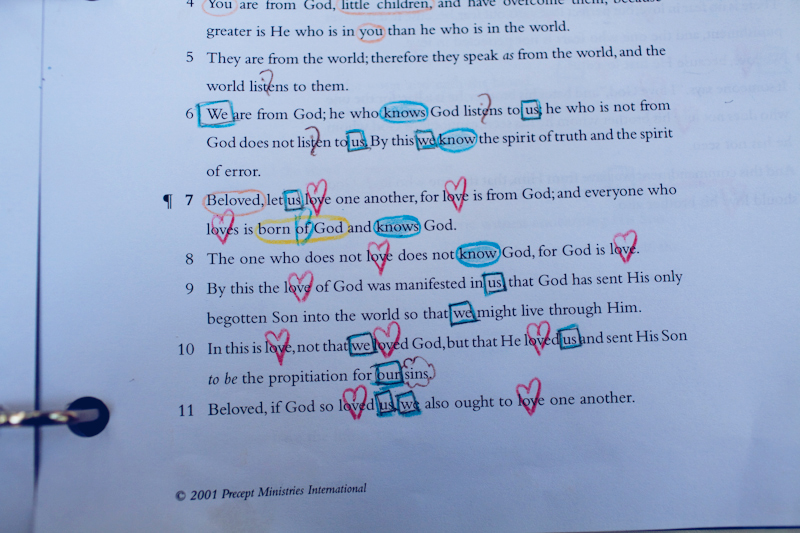 Do you think I John has anything to say about love? I think I'm gonna get worked. I mean, I already am.

After free time, John said it was time to play a board game. I stink at board games, but played along to humor the boy. We went outside to play Spill and Spell. I love this picnic table. And the aqua broom to the left. 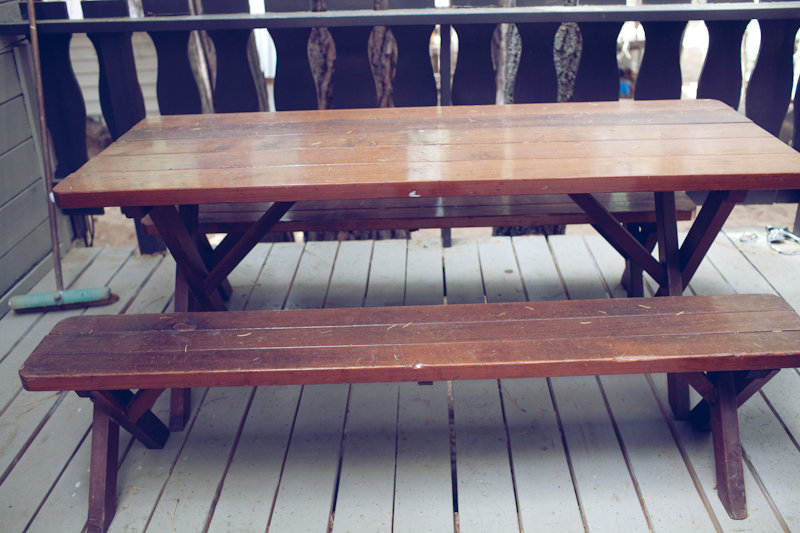 The goal of this game is to create word puzzles in a short amount of time. It's kind of nerve wracking. I'm too slow. Whenever the sand in the hour glass runs out, I jump and scream from the stress of it all. 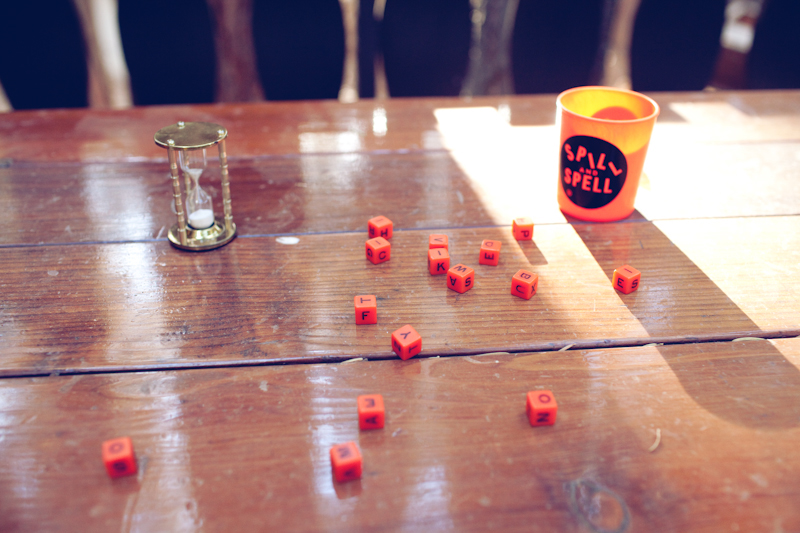 John pretty much dominated with his fancy SAT words. 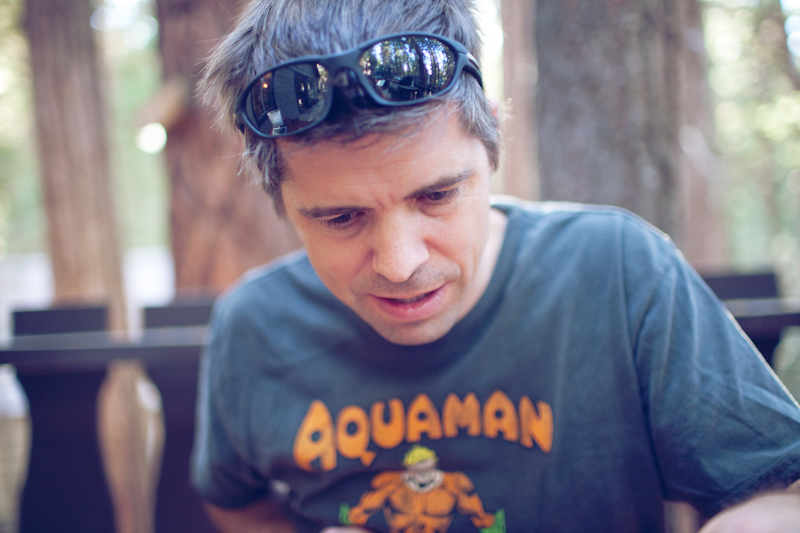 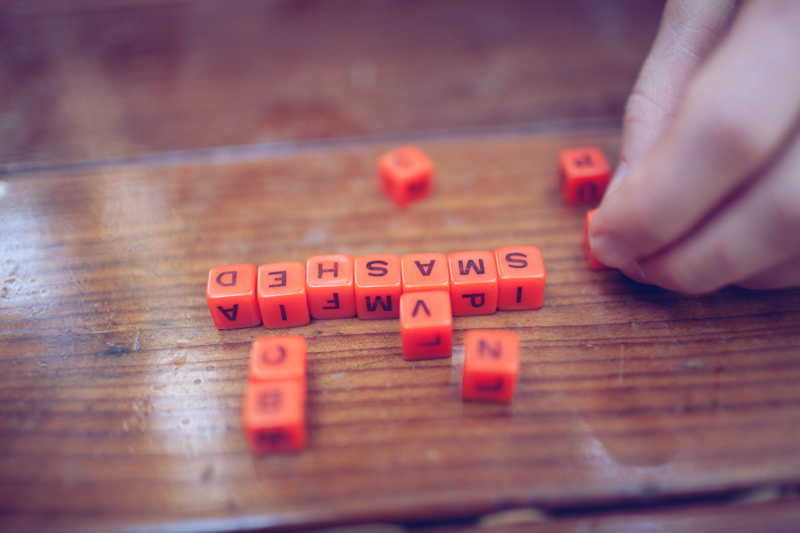 I only was able to come up with short words, but ended up winning the first match because John was being too ambitious. He's way better than I am and easily whipped me at match 2.

We then walked down to join our sister-in-law Kristin and kids at the snack shop for dinner. I'm kinda intolerant to cheese and milk so usually avoid it...but I could not resist nachos with jalepenos and a Hume burger. Totally worth it. Mmmmmmm. Cheeeeeeeeeeese. How I have missed thee. 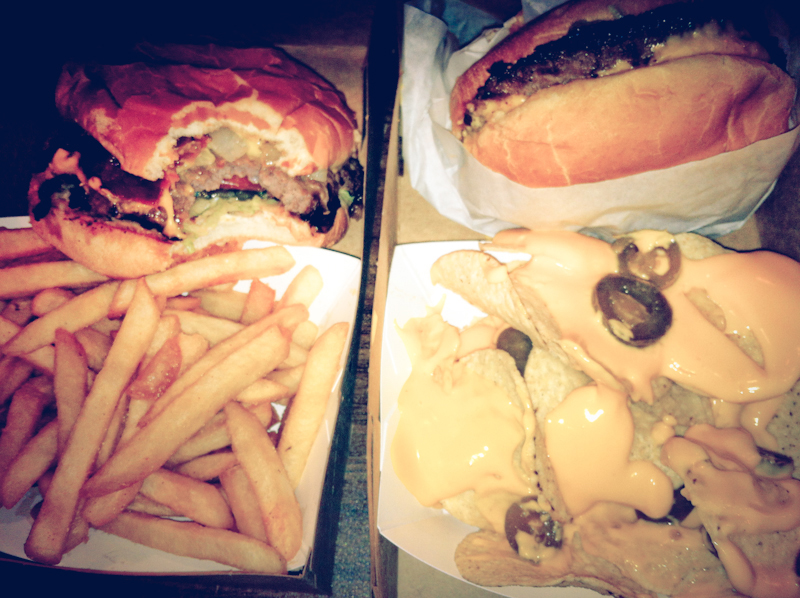 We had a lovely time chatting around the camp fire, and then we ended our day by snuggling up with a movie: Soul Surfer. I screamed when her arm was bitten off by that shark. But I loved the family in the movie. They were so much fun and the movie had a great message.

On our last day of our 'advance' at Hume, we listened to another seminar. This one was HARD and I squirmed the entire time. Tough topics with tough questions afterwards. It was discouraging and blah, but in the end, anything worth fighting for is tough. You have to periodically ask the tough questions and ask how your marriage is doing and how to make it better. And you might not like the answers your spouse gives.

And answer truthfully for yourself.

Then God has something He can work with to make you a stronger couple. John doesn't want us to squeak by as a couple. Nope that's not good enough for him.  He wants the sun, moon and stars. No pressure. I tend to be easily contented with chocolate chip cookies and I resist change. But I shall try my best to rise to the occasion. For John and ultimately God's glory.

One thing that helps me is, asking myself, "How do I want my future daughter-in-laws to treat my sons?" Um, they better give my boys what they need, lol. So I better be a good example of a good wife too.

Ok, back to the cookies. Kristin sent us home with a plate of cookies. {Green print to the left made by katygirl; you can visit her shop here! and hunger games card to right was from Olive Oyl. Love.} 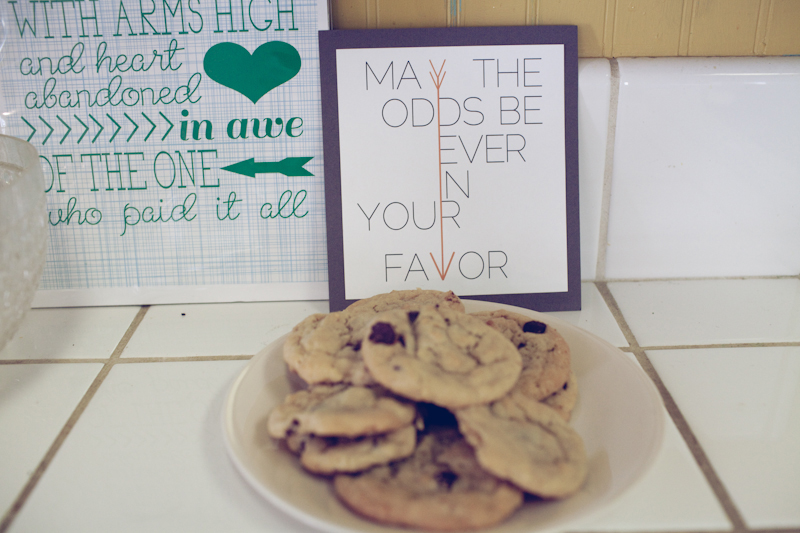 Look at this perfect specimen. The mark of the perfect cookie is that it's flat and puckers up where the chocolate chip resides. 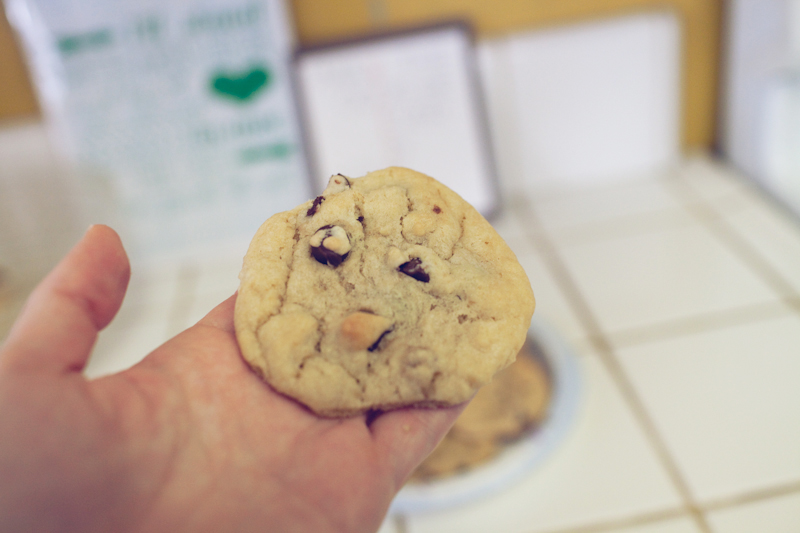 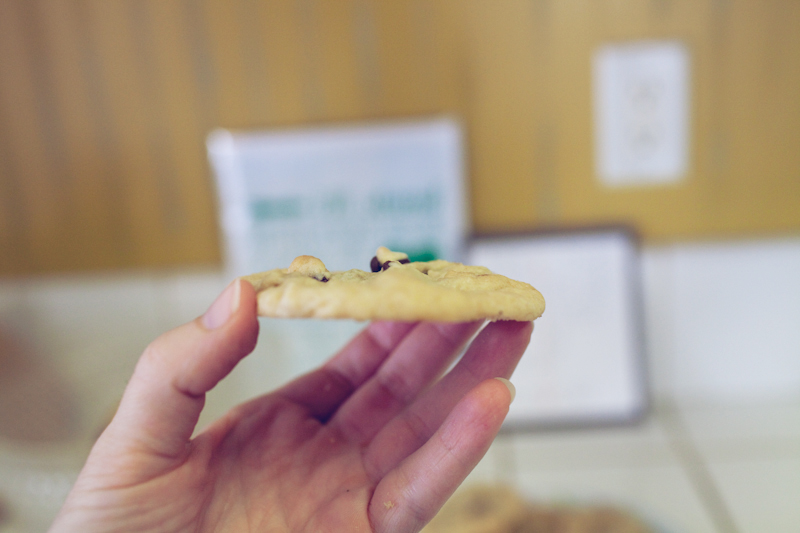 In sum, we had a great great trip to Hume Lake and I would totally do it again. I was thrilled to get back to the boys. My in-laws went above and beyond the call of duty, watching my boys and changing my dead van battery. So a special thanks to Ron and Betty.

The next day, Twain and Ollie screamed and cried and threw tantrums all day long, until I thought I would lose my mind. But today was back to the norm.

The end.
email me! i love you more than broccoli. bandofbrothers