Here is my new line of summer tees for Ollie. 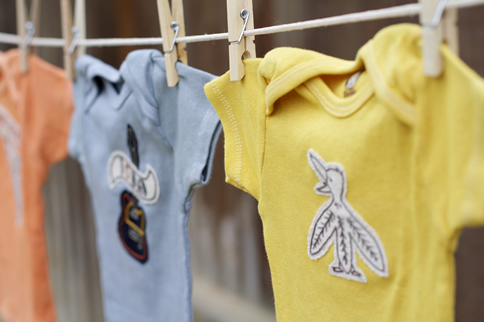 They are rough applique/embroidered tees . You should see the stack of lap tees I have piled up waiting to be stitched. I kind of went a little overboard dyeing them different colors. Every time I went to the store another color dye hopped into my basket. When I was in college my boss and I would argue endlessly over the color pallete of the tutorial we were working on. He wanted bright bold primary colors and I wanted dull muted colors--I just wanted our molecules to look a little more fashionable. Though I did not quite get my way in college, I was sort of able to get my own color scheme going here. 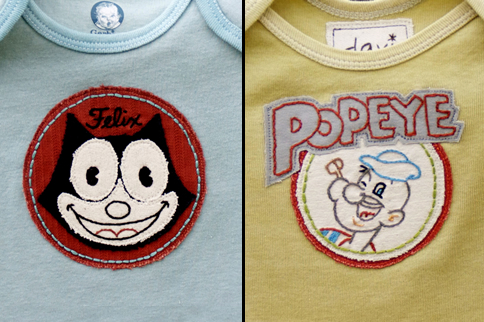 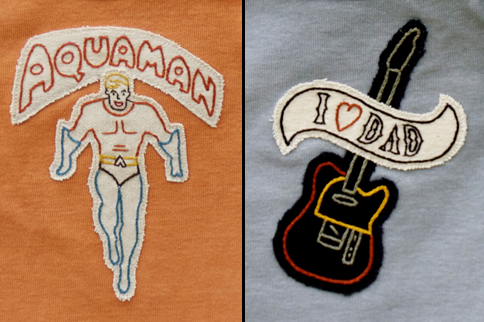 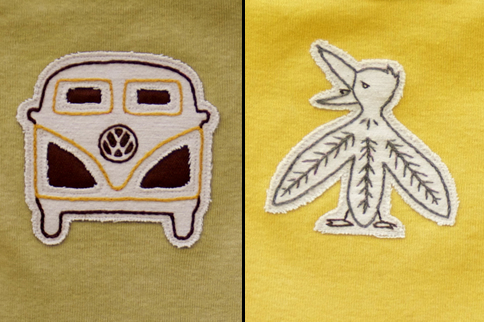 The bird on the yellow tee is my version of Mike's xanga bird(thanks so much Mike for letting me borrow your bird!!). 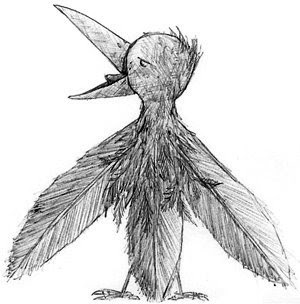 I tried to do Mike's bird justice, but it looks like I turned his lovely feathers into leaves. There were many problems with these tees as I was making them. In fact, practically every single applique almost got trashed halfway through, due to some problem or another. For example, when ironing my Popeye tee, part of the white Gerber label melted and smeared white paint across my Popeye words--I almost threw it away but instead tore the words off and put a bigger word patch over it. I also hid the mangled Gerber tag by placing my own "davi" tag over it:)

Other problems? My VW logo looked like a pretzel according to John. And the list of offenses could go on and on, but I kept reminding myself that these are handmade. My new motto became "work it out". So I kept going despite these imperfections. Each tee taught me a little something new--next time I make one, I can apply what I learned. This project certainly kept me busy during the boys' sleep times. I could not figure out why everything was taking me so long. Then my father-in-law said "however long it would normally take you to do a project, multiply that by the number of kids you have". Makes sense to me.

I also made Ollie a new summer blanky. How could I resist the lovable scoundrel Popeye? He was one my favorite cartoons growing up! 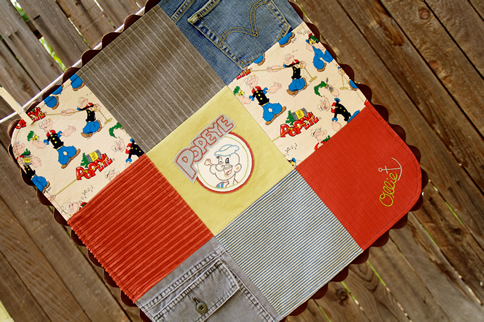 I had a lot of fun taking pictures and borrowed a friend's camera for the job. I also tried to get a few shots of Ollie in his new clothes but that was not so easy. He kept turning his back to me, so I only got a few shots of his face. Clothes are certainly a lot more cooperative. 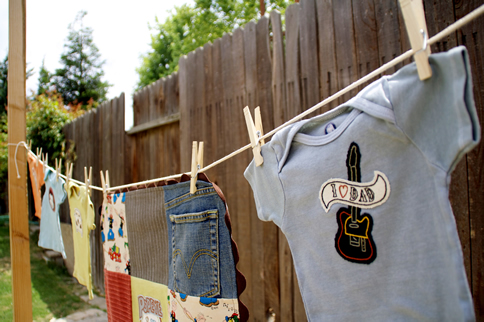 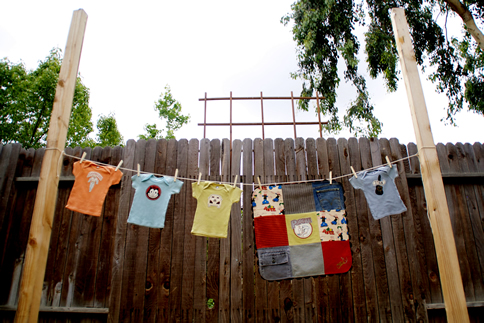 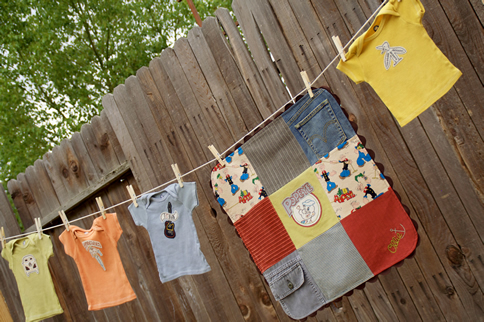 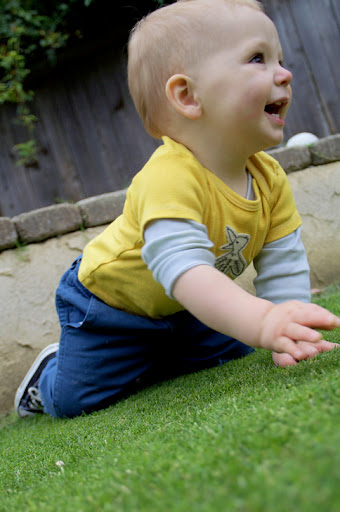 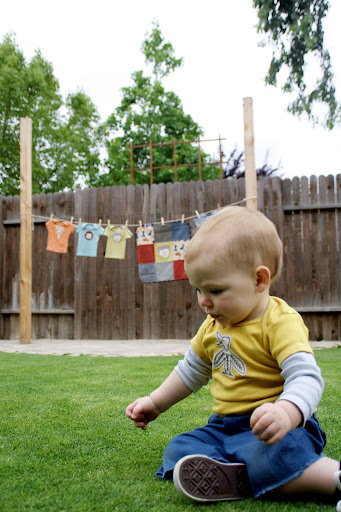 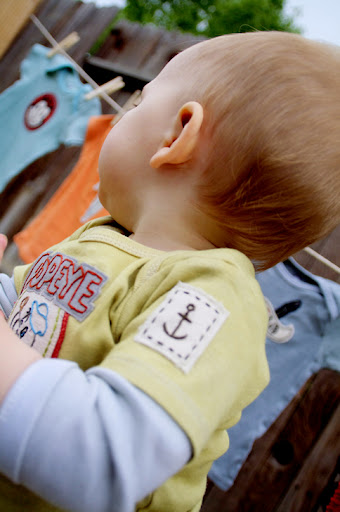 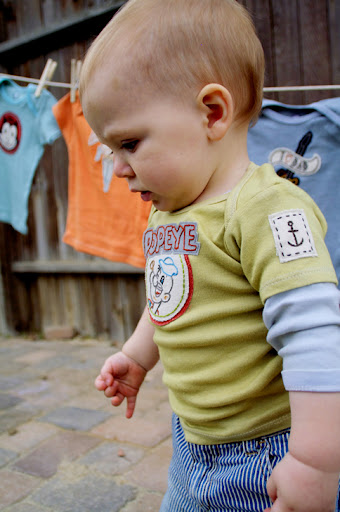 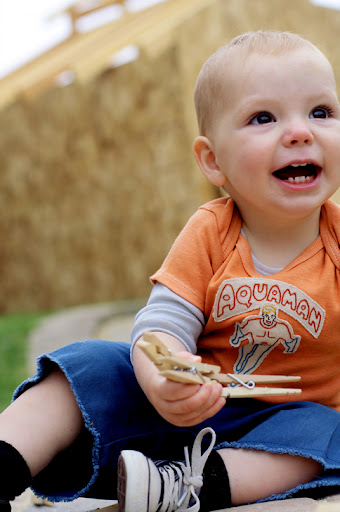 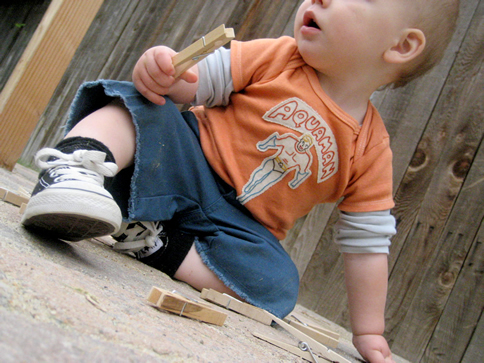 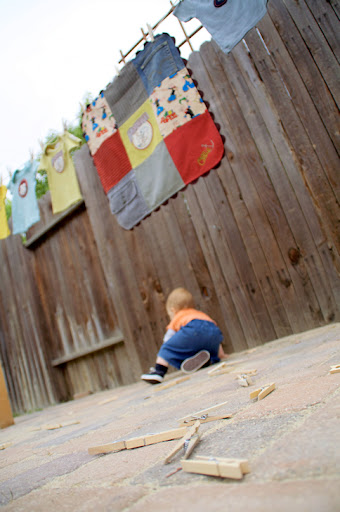 Did I mention Ollie turning his back on me? Seriously, he would rather crawl away and eat dirt and rocks then give me a little smile. There is NO modeling career in this kid's future.

All-in-all I had a lot of fun with my imaginary business:)
*disclaimer--licensed characters like Popeye, Felix and Aquaman, and logos like VW require a special license to sell them. I may get licensed in the future.
email me! i love you more than broccoli. bandofbrothers