On Christmas Eve morning, I awoke feeling a little bit ill.
This was not morning sickness.
No, this was a small case of the jitters. In just 5 short hours, my first-born son would be playing his drums to accompany the children's choir at our church's three Christmas Eve services.
All along, I had pictured a little rinky-dink church service. What did I know? I had never been to one of our Christmas Eve services. But I should have known better. Nothing our church puts on is rinky-dink in nature.
Dress rehearsal the day before clued me in real fast. Professional sound-people racing to and fro...directors hustling by...the lights turned down low with spotlights on performers...gulp. Of course Finn had a very small role in all of this, but still. This was an actual production.
At that rehearsal, I somehow decided to go and sit directly behind Finn's drums, to hear what was going on. And it's a good thing I did. John was on the piano, Uncle Mark was playing his guitar, cousins Emma and Brooke were part of the choir and Auntie Paula was directing the choir. When John started to play the piano, I felt a bit panicky. Finn and I could not hear a single thing, except wild static blaring directly at us from a huge speaker. Finn started playing his drums anyway and we could just barely hear the faint sounds of the children's choir.
Something had gone terribly wrong. Finn was basically playing in the dark. Finally, I gathered my senses and hailed down a sound guy.
"Finn needs to hear his daddy playing the piano", I frantically explained. 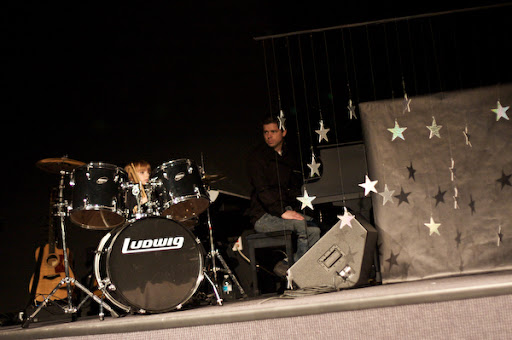 A few moments later, the sound guy fixed the speaker and we could hear John playing the piano. From then on, things went fine, without a hitch. But still, I was a bit shaken. I had a whole new level of respect for the whole sound system and how completely dependent we were on these sound guys.
Hence my nerves that next morning. And excitement. Let's not forget excitement. John and Finn were not phased in the least. 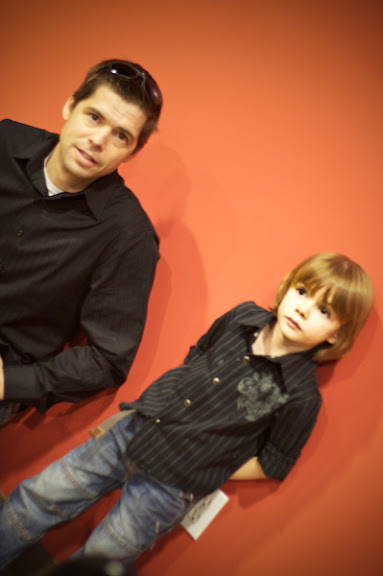 I guess I was going to have to be nervous for the both of them.  I consoled myself with the fact that this whole production was to celebrate the birth of our King, and that it was not about any of us anyway.
My mom drove down to watch and before we knew it, we were sitting in a darkened audience waiting for our Finn-boy. 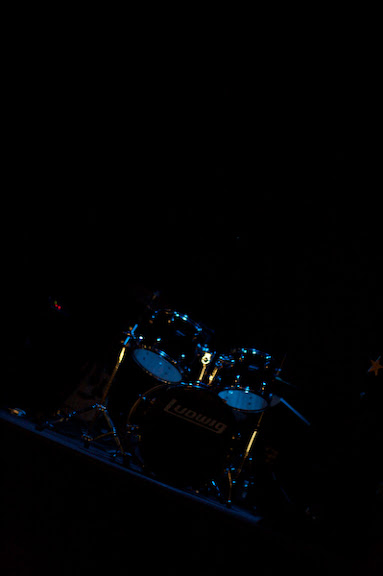 And then his tiny little face emerged behind his enormous drums. 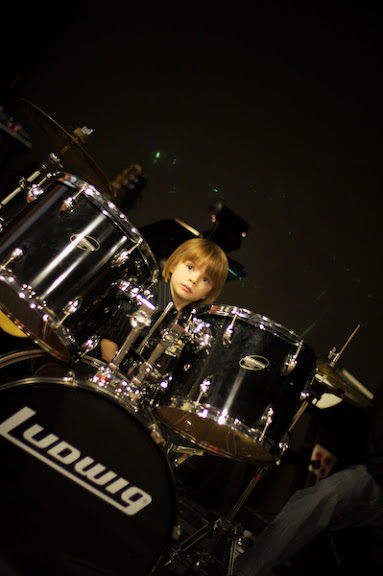 John and Finn playing together under the green spotlight. Oh gosh, Finn was oh-so-serious. 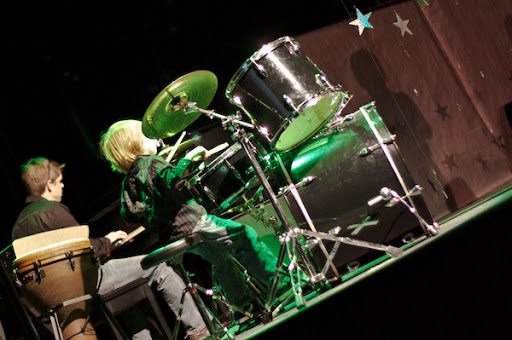 Everything went well and it was all so, so cute. Finn did his thing...the kids sang...they did this for 3 separate services. Whew!
I am a terrible videographer. Here is my feeble attempt to capture some of this action on my point-and-shoot(During the song, members from the audience were participating by hanging stars on the stage--that was kind of chaotic).
Watching John and Finn play together was the perfect Christmas gift for me. I could not have asked for more!
email me! i love you more than broccoli. bandofbrothers