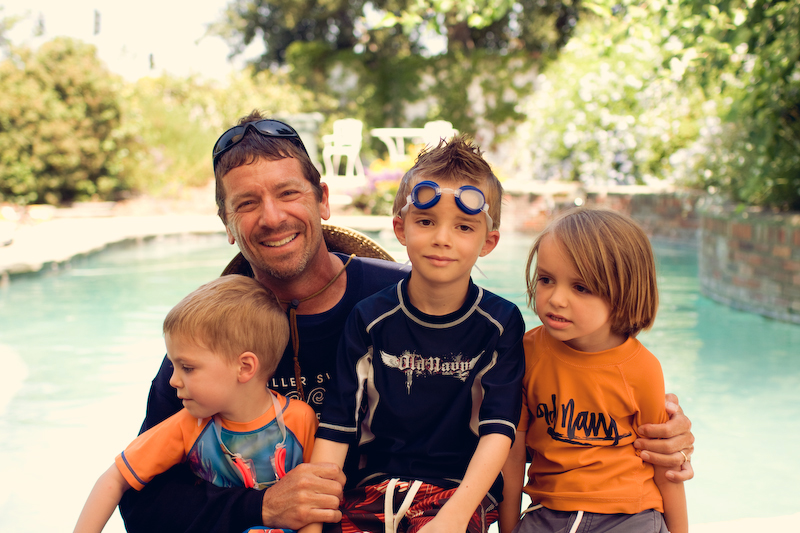 Swim lessons this year made my stomach hurt.
Let me explain.
Here is a photo of Ollie BEFORE the existence of swim lessons. Eager and idealistic. He's even sporting a 'leave it to beaver' hairdo. 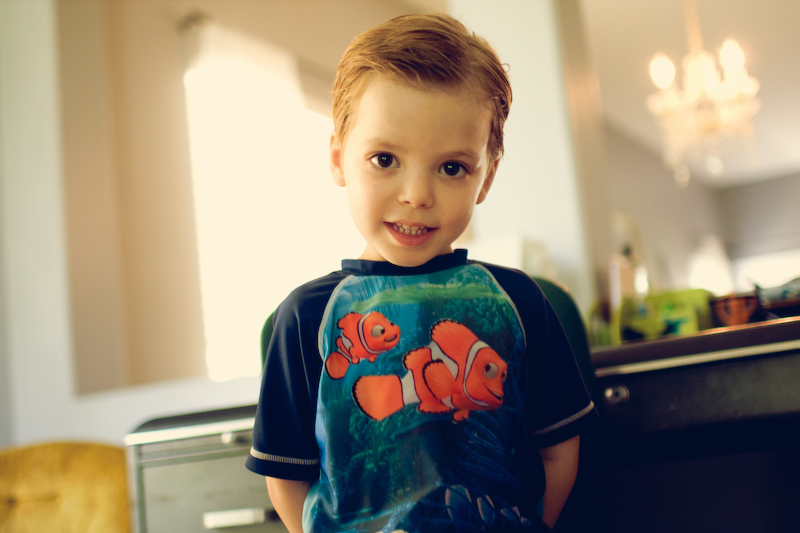 Here is Ollie AFTER we introduce him to swim lessons. Suspicious and jaded. 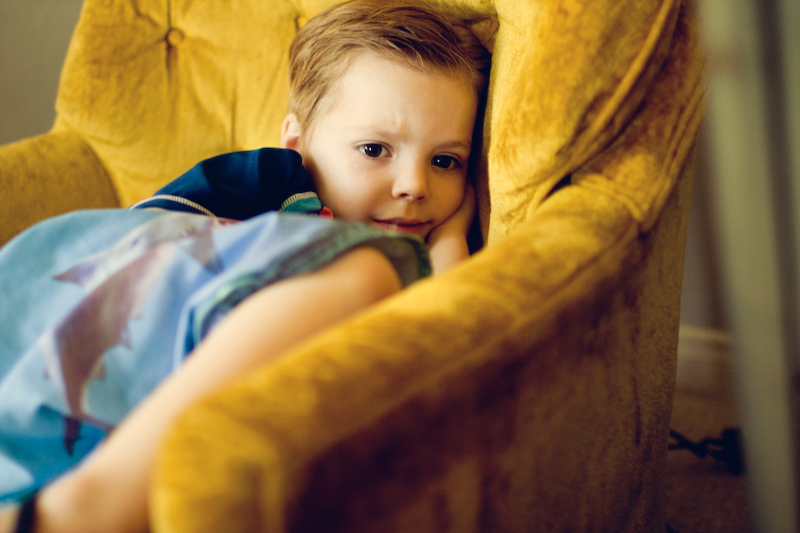 Every morning he'd ask, rather anxiously, "We're not going to swim lessons today?"
It's only 8 am. Swim is not til 11. What am I supposed to say? I do not want to lie, but I do not want to say "Yes, we are going to swim lessons again", and have my child scream and whine and dread the very existence of his life for the next 3 hours straight.
So I'd say nothing and try to redirect his attention to something else. Which of course did not work. Ollie is not clueless. He just knows. So our mornings were met with much stress and dread.
We decided to have him go first each time, just to get it over with. 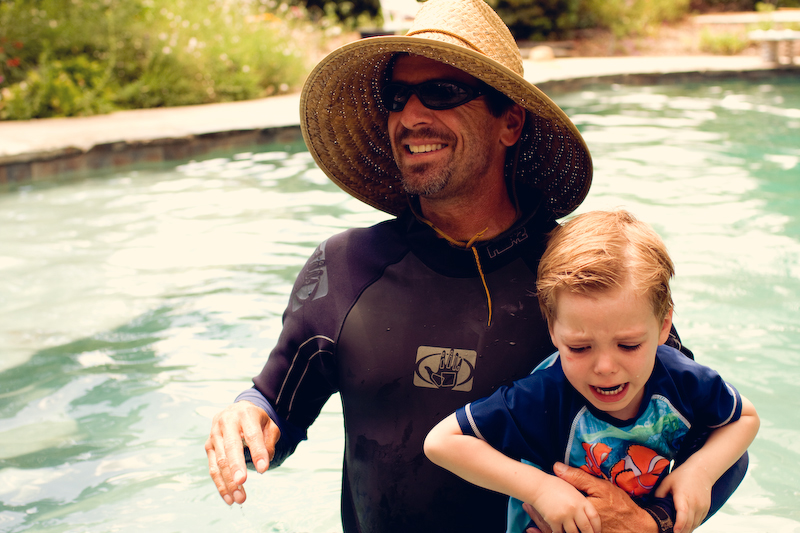 The first 6 days(out of 9 days total), he screamed hysterically pretty much the entire time. Hence, my stomach ache. I knew ahead of time that Ollie was gonna be a bear and I thought I was mentally prepared.
But when your kid stars wigging out in front of everyone...it's kind of stressful. They are private lessons, but the other people before and after our lessons tend to hang out a bit. The other swim contenders that year hardly cried at all and so we caused the scene each time. Thankfully they were kind and compassionate: "Oh, you should have heard my daughter her first year...she screamed the entire time..."
There was lots of arguing from Ollie. 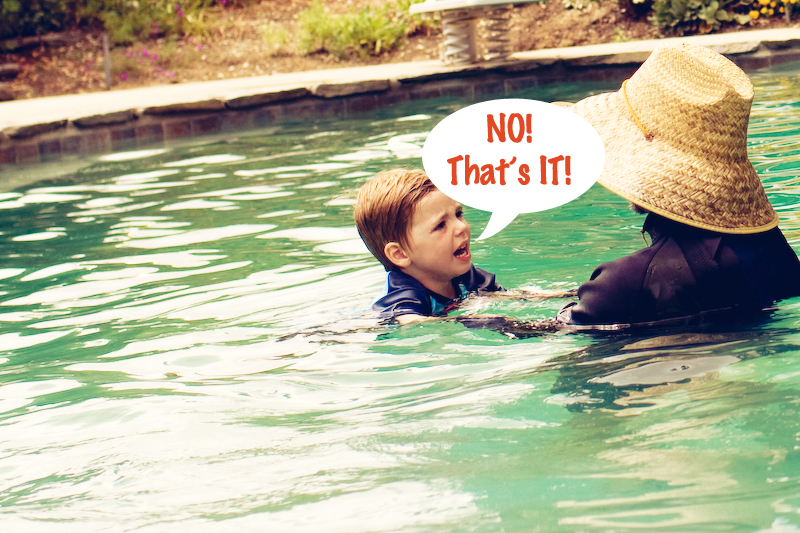 That is pretty much the only thing Ollie had to say to 'Mr. Netti'. NO, that's IT! NO, that's IT. Basically every time Ollie did anything, he deemed himself accomplished enough to have graduated from these measly swim lessons.
So what DID Ollie do at swim lessons?
He grabbed onto Mr. Netti for dear life, clawing and scratching at him til Mr. Netti yelped in pain. 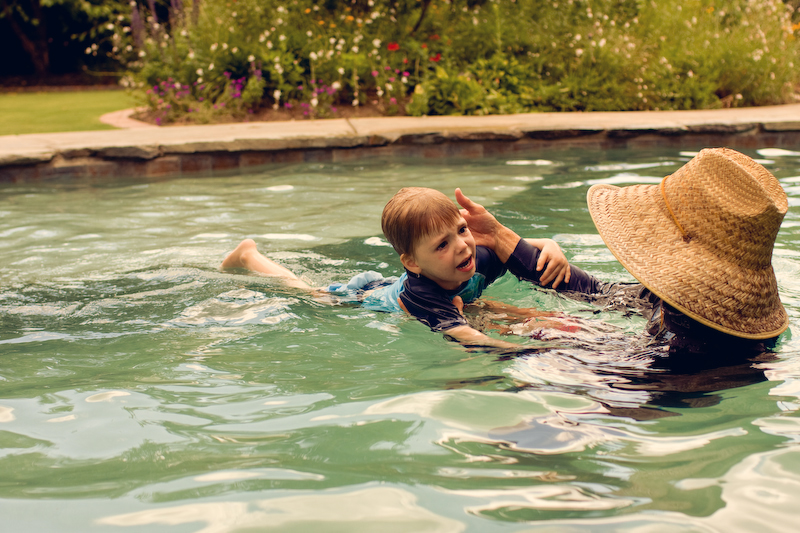 And when Mr. B did manage to claw Ollie off of him, the main thing they worked on was holding his breath and dunking him under water. Gosh, this was all they did for 6 days. 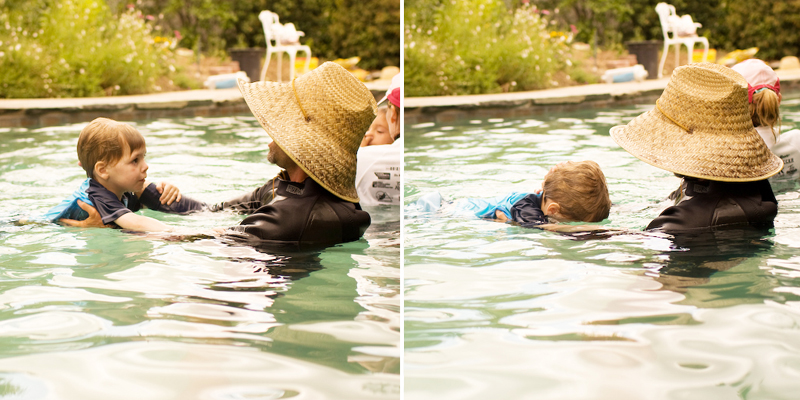 And there was the occasional kicking and twisting to the side. "I've never seen anyone twist like this before" Mr. Netti commented. 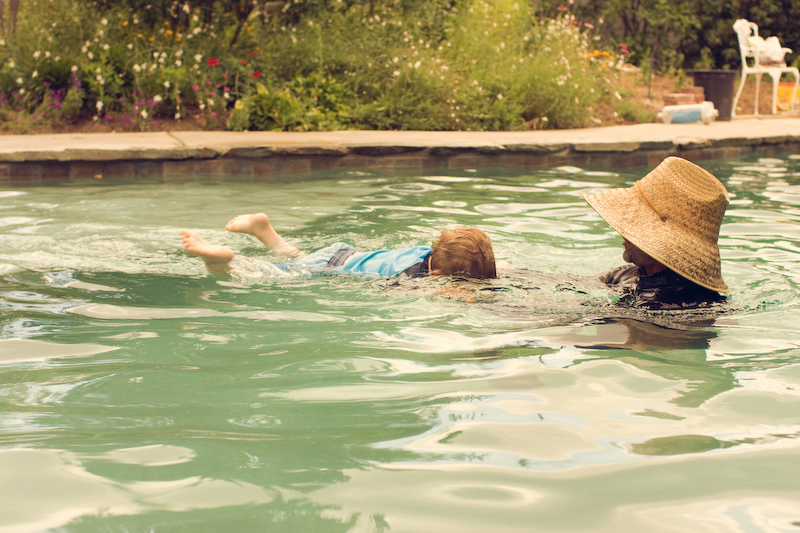 "Must be from his sensory disorder", I muttered. "His ear thingies are a bit "off" and so his balance and orientation must be somehow affected", I reasoned. As Mr. B just kind of stared at me and scratched his head.
Those were hard days for us all, Mr. B included. We were all frustrated. One day I brought a piece of cake as a bribe for Ollie. When I showed Ollie's cake bribe to Mr. B, he asked, "Is that for me or Ollie?" Ha. Still don't know if he was joking.
After Mr. B would dunk Ollie's head under water he'd ask "Did that hurt?"...to which Ollie shouted "NO!"...to which Mr. B would reply{with attitude} "Then why are ya crying?". This line of questioning went on and on, as my stomach churned.
And when the crying got to be too much, Mr. B would stick his finger in Ollie's mouth, LOL. 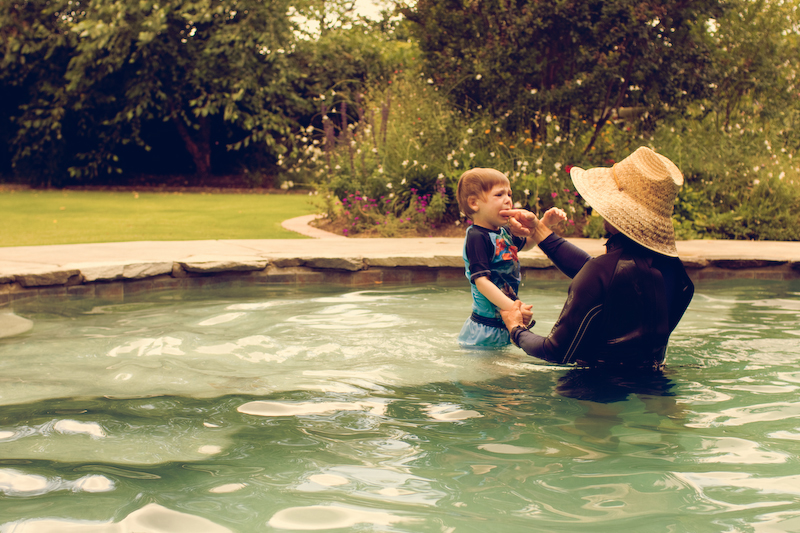 This above photo cracks me up because it's so representative of our session this year--Mr.B is not politically correct at all and that's why we love him:)

And at the end of Ollie's lesson, Mr. B would toss him back to me and mutter something like "you are one patient mom". 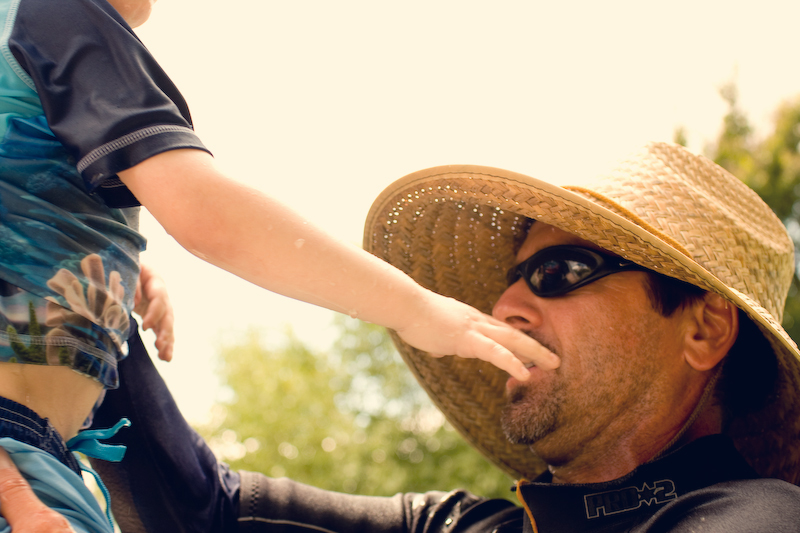 In all truth, I did NOT start out as a patient mom. But Ollie has changed me. I have a lot of sympathy for kids with issues. Truly, the Lord has given me all that I need to deal with Ollie's problems. I just have to ask Him for wisdom and help. And there are times I don't even know what to ask for and God surprises me, by lavishing unfathomable blessings in the most unexpected places. Like his speech teacher, Mrs. Margie.

I would be remiss if I did not point out some of the good times at swim lessons this year.

There were lots of hugs and reassurances from Mr. B. And inquisitions about the Nemo on his shirt. 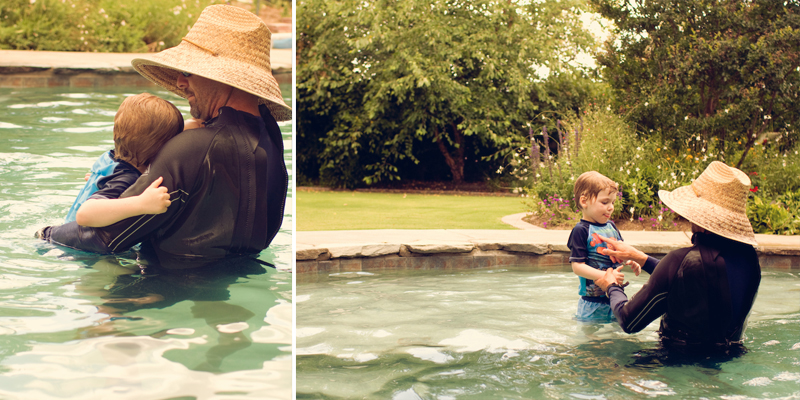 And the time we were clapping for little Hannah. Ollie rushed over to the pool and stuck his feet in, kicking, and said "clap for Ollie too" with tears in his eyes. Poor little sensitive thing just wanted our approval. Sweet and sad at the same time. 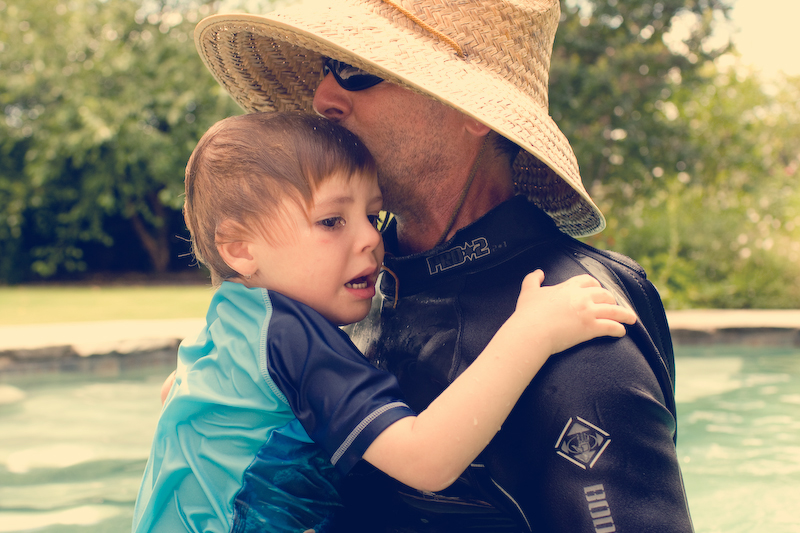 And if you can believe it, the last 3 days Ollie hardly cried at all(Might have had something to do with a bribe of mini-marshmallows). He even managed to straighten out his body a bit. 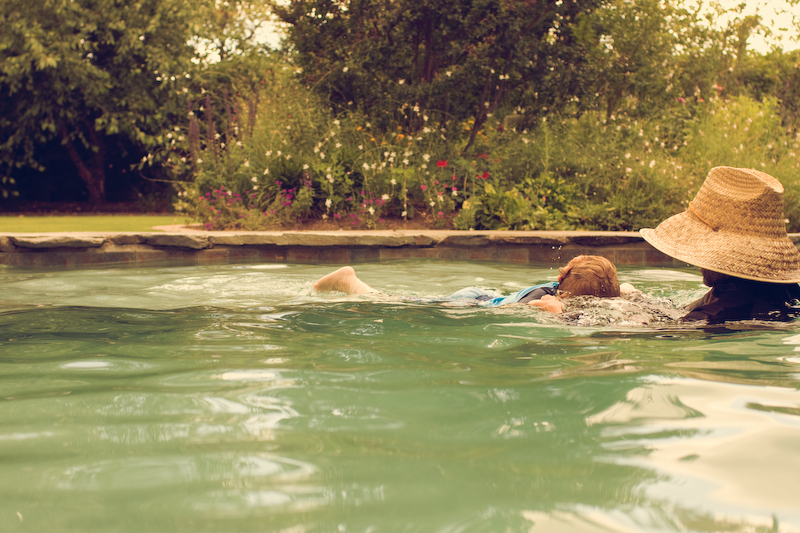 And here{on day 9} is the faintest glimmer of hope that maybe one day Oliver WILL swim after all. Do you see him willingly dunking his head under water and kicking his legs? 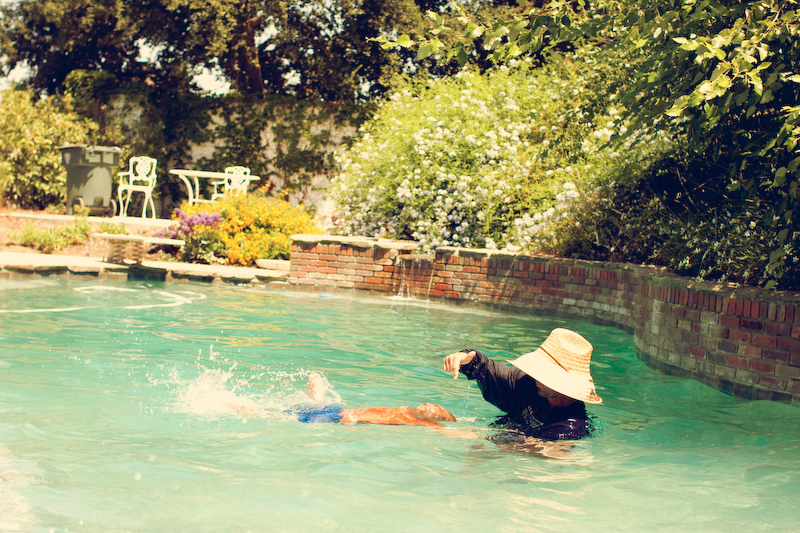 Almost swimming, but not quite. And that is ok. I'm thrilled that he was not screaming til the bitter end. He was really scared and so to {temporarily}overcome his fear is something to be celebrated, in my opinion.

Calvin and Finn were relatively easy this year.

Calvin. Surprisingly a bit timid and cautious in the water for our little daredevil, but overall cooperative. Calvin swims confidently to a smiling Mr. B. 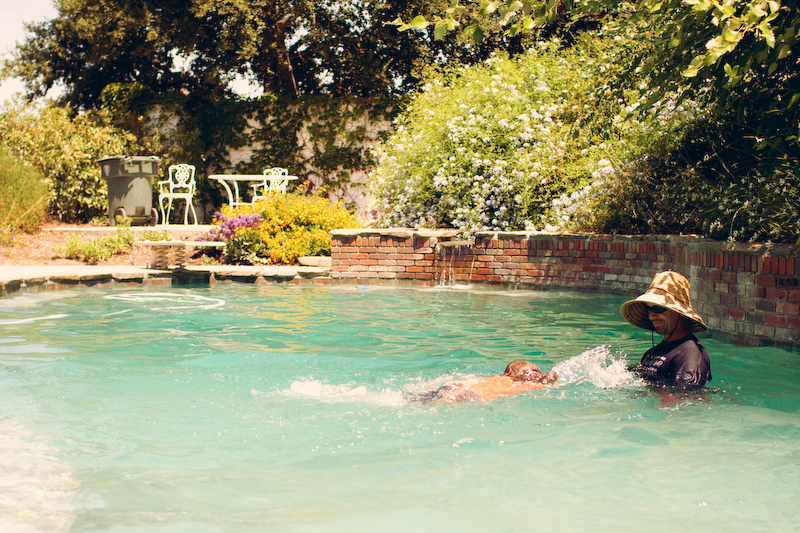 This year Calvin worked a lot on the back float...which he did not particularly like. But once again, he was cooperative. Shaking like a leaf at times. But he did well. We are pleased. 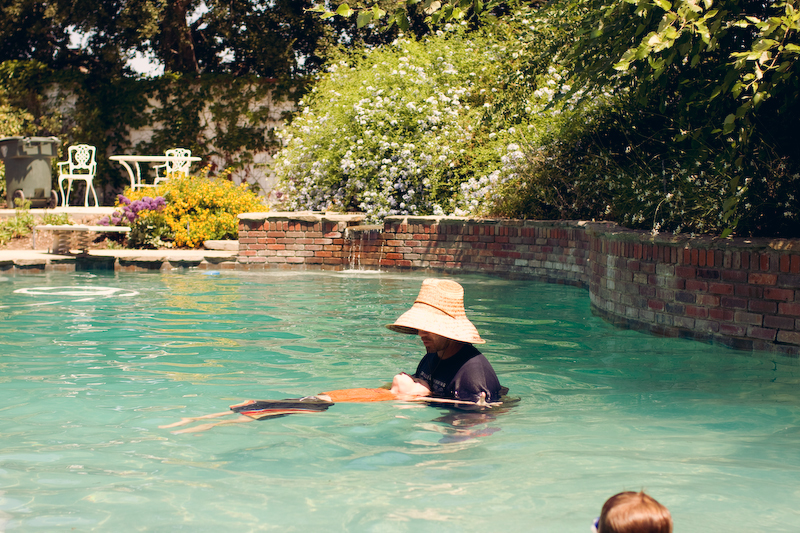 Calvin got an ear infection this year, half way through his session, that almost threatened to end his swim career early. But with the help of a remedy and those silicon ear plugs, we powered through, yeehaw!

This was Finn's year. He's confident and LOVING the water. Praise the Lord. He's come a long way since the days of shaking like a chihauhau. He wants to swim all the time. And jump off everything. And splash us all over. Just like a regular kid.

He's so thin, that you can barely see him in this photo. And mom and I die when he takes his swim shirt off. You can count his ribs. 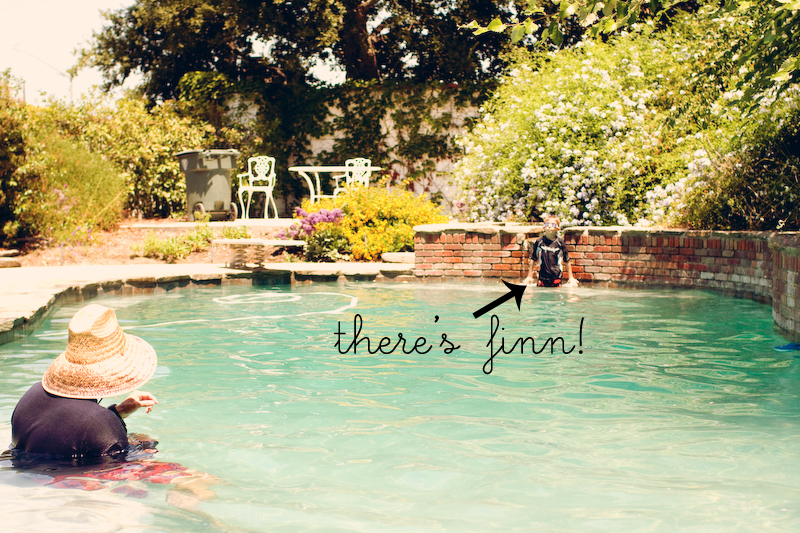 Swimming across the pool to Mr. B. 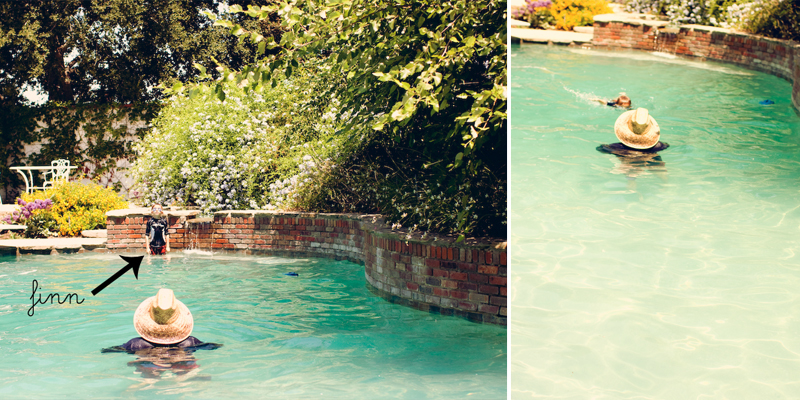 This is the year of the 'big' swimming arms for Finn. 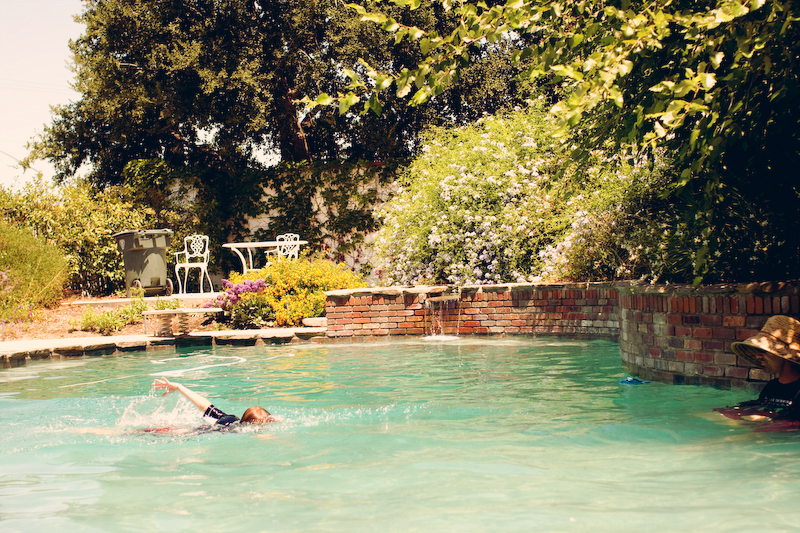 Mr. B says he's pleased with the boys.
And so are we!
{all things considered}
ha.
email me! i love you more than broccoli. bandofbrothers