i have a dream 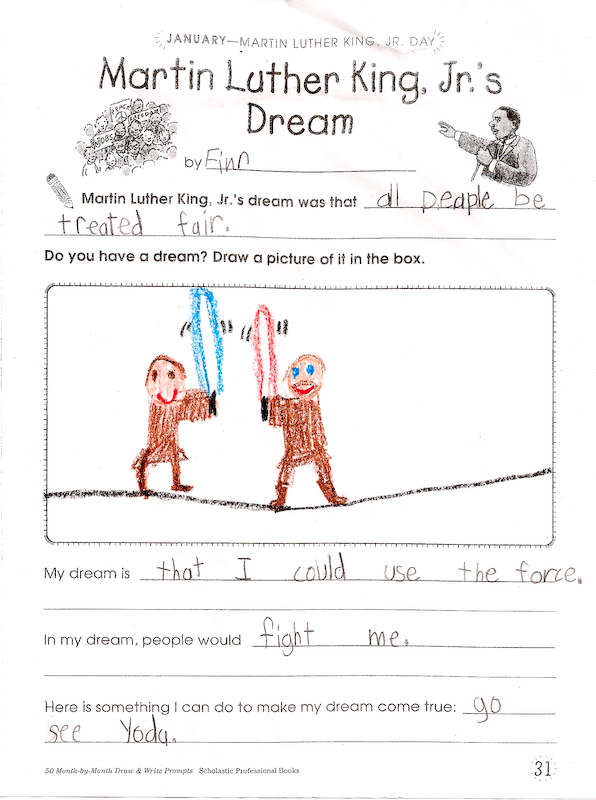 Oh Finny!
I can only imagine the look on his teacher's face when she saw Finn's grandiose dream. Though I am sure she is quite accustomed to the Star Wars frenzy with boys these days.
Lately Finn has been playing "Star Wars" at recess with his friends. Whatever that entails. Pretend light saber duels???
He used to only play soccer and football at recess. Here's how it went: whenever one team starts to lose, the boys on the losing team gradually defect over to the winning team until there is only 1 or 2 players left on the losing team. If it weren't so dishonest, I would find it very clever. It totally upsets Finn. He thinks they are such cheaters.
"Why do you continue to play with them?" I ask. Find some nice friends who do not cheat.
And so I am thankful Finn has found some nice little Star Wars friends to play with.
Finn recently made a "Baby's First Alphabet" book, Star Wars version, o'course. Here is a representative sampling of this educational little ditty. 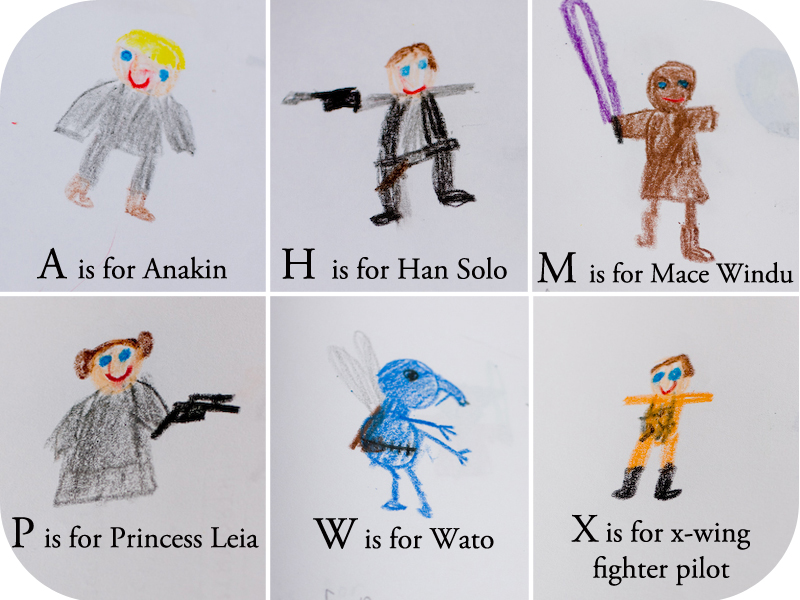 Teach your child the entire alphabet, Star Wars style! Peruse through his collection, A-Z.
However, I do think Finn and Calvin have gone a bit overboard with Star Wars these days.
The other night at dinner, I was quizzing them about the bible story I read with them earlier that day. Their response was composed of rather unenthusiastic mumbles.
"We are failing them as parents!" I wailed to John. "They can quickly ramble off the most obscure Star Wars facts."
He agreed. "No Star Wars movies for a week!", he decreed.
Which is a start but not a solution to their problem. When I read the book Idols of the Heart, I remember discussing idolatry with my older sister Jessica. She said that she talks about it with her girls all the time. Her girls are able to point out idols in their own hearts and lives. I was impressed.
So, the boys and I have been talking a lot of idols. How Star Wars can be an idol to them when it's more important to them than learning about God.
We talk about how it's an idol when it's ALL they can talk and think about.
We discuss how the force is not real but how God's power IS real.
And we certainly discuss how God is WAY more powerful than Darth Vader and Darth Maul.
And I don't think there is anything wrong with my boys enjoying Star Wars, so long as it's put into proper perspective.