I just marvel at the fact that THERE ARE LITTLE PEOPLE WALKING AROUND MY HOUSE.

After getting hitched, John and I waited a little while to have kids. Like 7 years.

Our first year, we were still in college together.
The next year I taught high school and it was a big fat joke...so I retired.
Five years I went to graduate school...halfway through...really wanting kids.

So I know how it feels to wait and really want to have kids.

Some people think it's odd that I love having kids so much.

Partly it's because I appreciate having them after waiting so long. My house was quiet for 7 years. But even if we got knocked up immediately, I'm sure I would have loved it. Might not have been as appreciative though.

So when I see a little toddling tush walking by...minding its own business...just meandering through the house, I am awe struck at God's goodness. And I think to myself. "Omyword. Is this really my kid walking by?"

And the little evidences of these small human creatures are scattered around the house. I get such a kick out of it.

Like for example, this week I was walking through the family room and saw this lego robot that Ollie had made. Just sitting there against my girly wall. 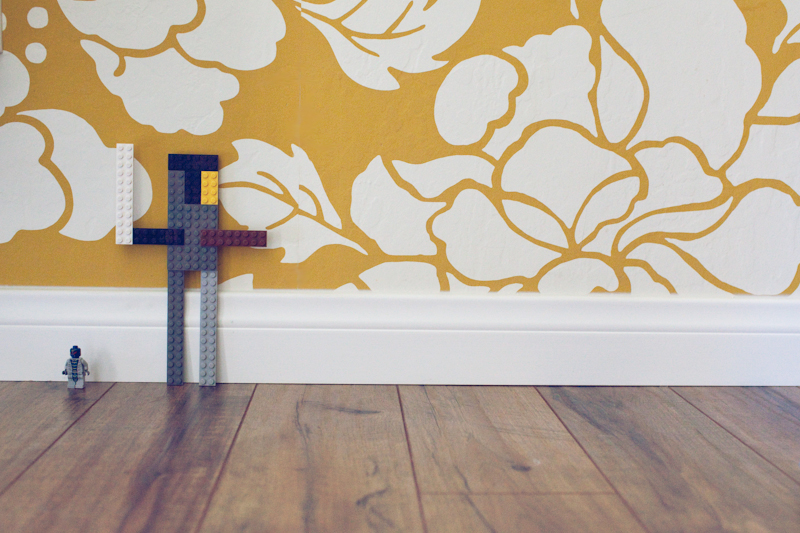 "Oh it's the samurai", he explained. Which is a big robot from Ninjago. Of course. It's always Ninjago these days.

And then I glance over and Finn has some cotton balls in a dixie cup. 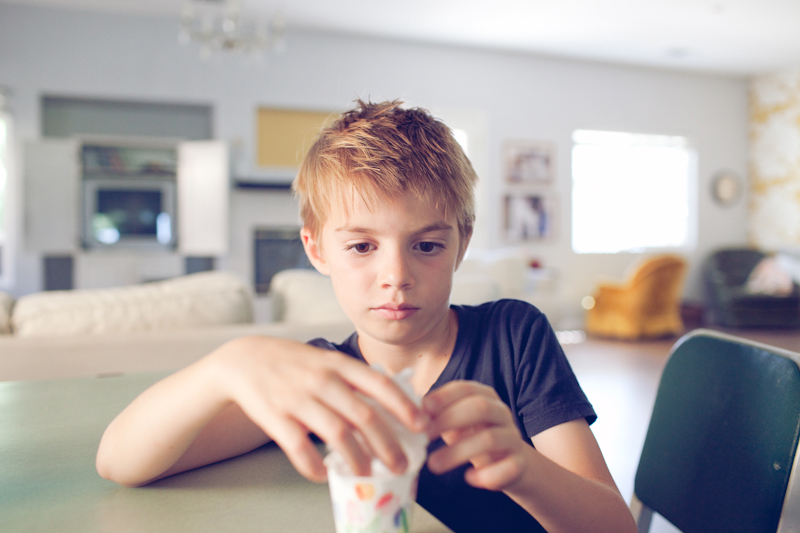 This is how itching powder is made, apparently. I mean, you could buy it at Target. Or DIY at home. Your choice. 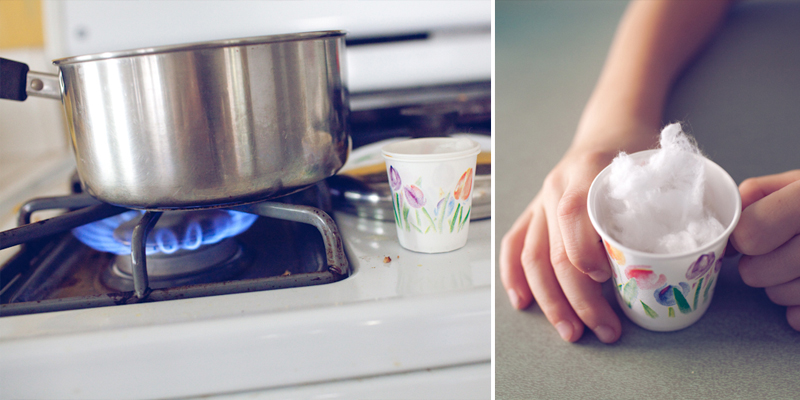 Just boil up some water and CAREFULLY place your dixie cup of shredded cotton balls next to the steaming water for 23 minutes{ehhh 23 hours...same diff}, so the cotton will absorb the moisture and magically become itching powder.

Don't blame me if your experiment doesn't work. You are the one who wanted to make itching powder, not me.

Other evidencing of these little humans are more concealed. For example, we recently discovered that Finn hides all his teeny tiny Ninjago lego weapons under his bed so Twain can't find them.


Well Twain may be the baby of the family, but let me tell you something. He's not stew-pid. The other morning he whispers sheepishly in my ear, "can I play with Finn's 'ninjado' swords?"

"Sure Twain. Where are they?", I ask curiously.

And then Twain crawls waay under Finn's bed and unveils the secret stash of weapons of mass destruction. Bam. 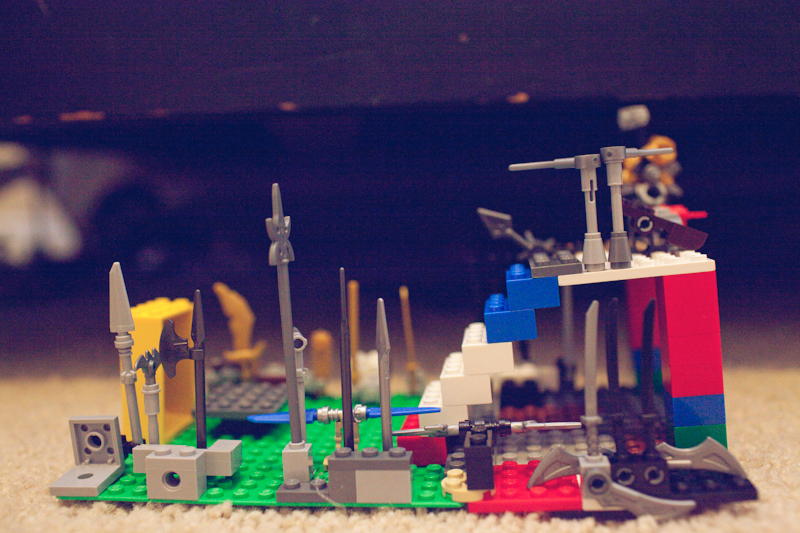 So. I let Twain play with one sword at a time, and then he must put it back. Shhhh. Don't tell Finn. Our lil secret, k?

These two are always conspiring together in their bedroom. Snuggling under covers, plotting about their kitties. 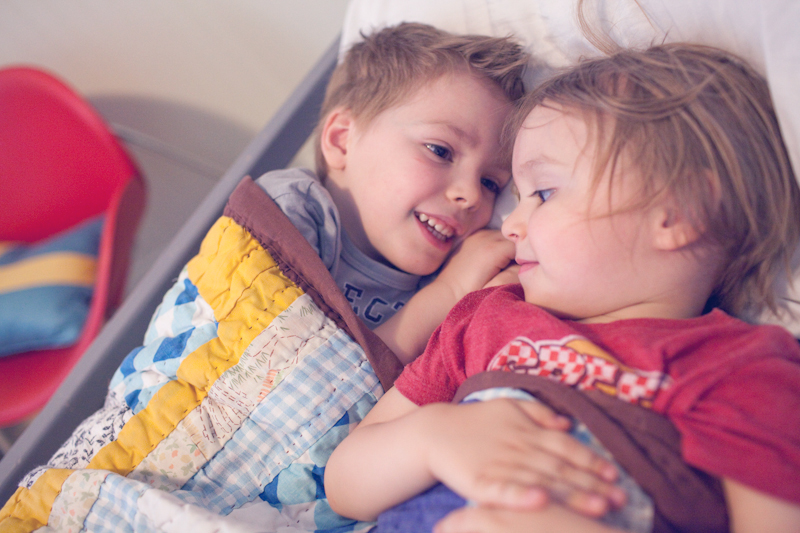 Right above his bed, Ollie constructed this kitty condo, complete with balcony for Sir Tux and Master Tabby. These tiny kitties are living large those days. 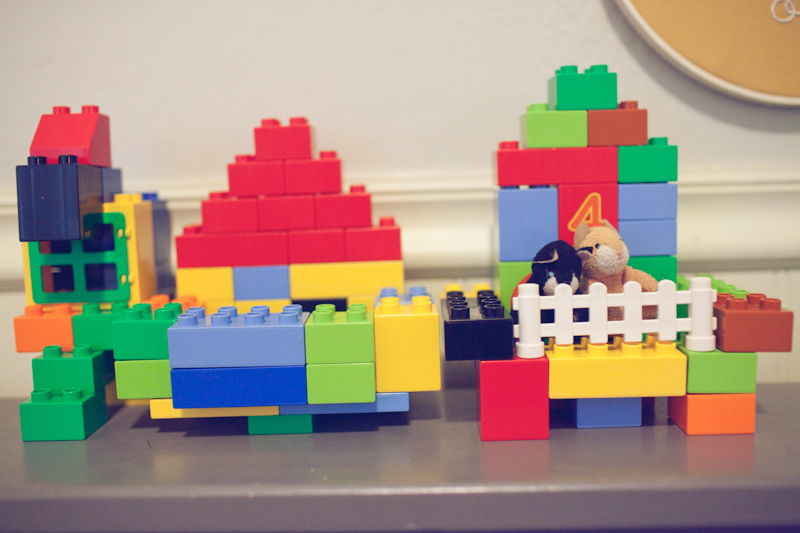 Tabby and Tux can even brush their teeth in the little complex to the far left. So fancy. I wish I had my own outhouse to brush my teeth in.

Ollie also made this little lego car for Twain to drive Tabby around in. And it was on the counter and every time John and I passed it, we smiled. 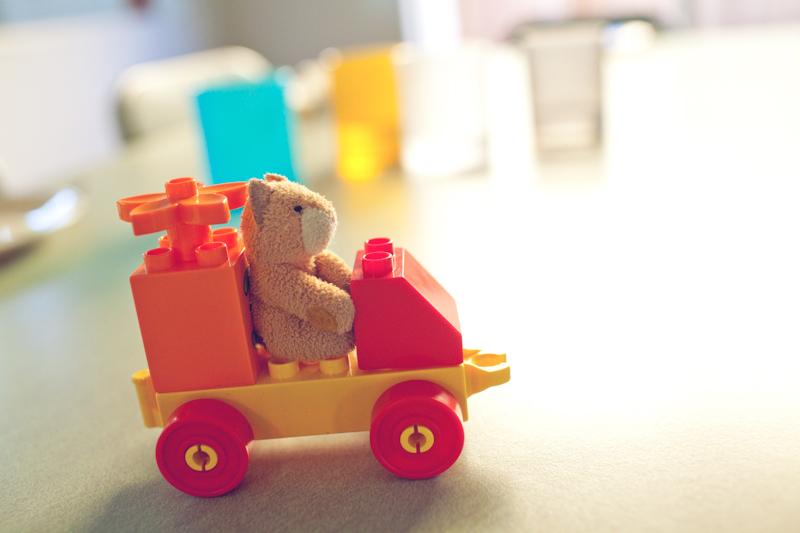 Sometimes this kitty can be seen holding a teeny tiny ninja sword.

Soooo. What do you get when you cross a kitty with ninjago? 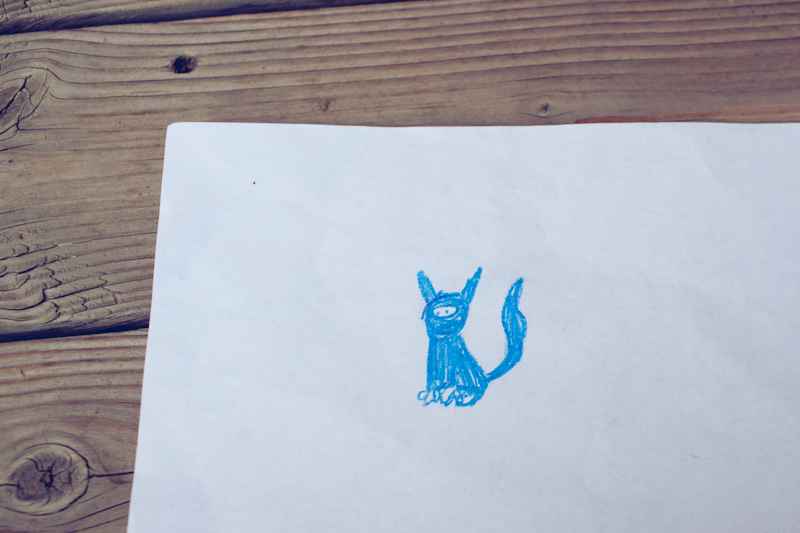 A ninja kitty. This creation was invented by neighbor Libby. She knows how much Twain likes the blue ninja Jay...and kitties. SO voila. Blue ninja kitty.

When I refer to Ninjas, you don't have any idea what I'm talking about, do you. 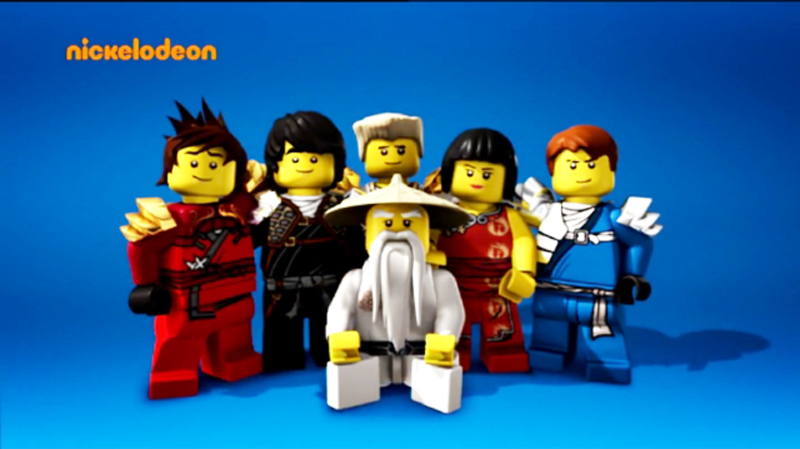 Kai: Red, master of fire. Has cute spiky hair.
Cole: Black, master of earth. Has bushy eyebrows.
Zane: White, master of ice. Has no sense of humor and is the odd ball of the group.
Jay: Blue, master of lightening. Talks a lot and is funny. Has a crush on Kai's sister, Nya.

Hey. Pay attention. There will be a quiz at the end.

Sometimes they wear hooded masks. I prefer that they do not. Because they have cute hair. And it's all about the hair. I was poking around online for sketches of these little cuties. Presh. 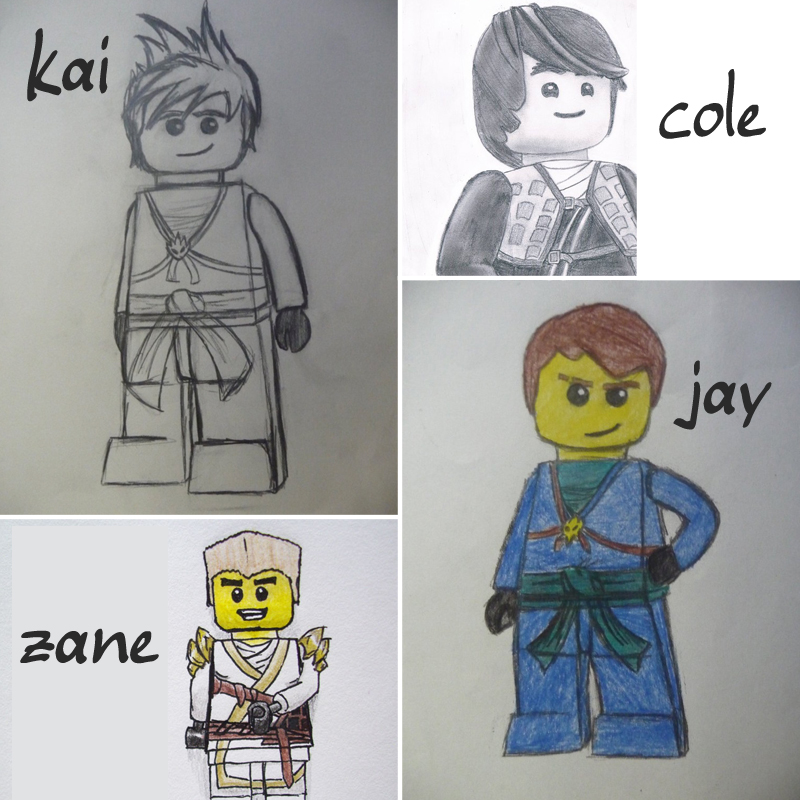 Then I got a little scared when I realized that some teenage emo girls are taking these Ninjago legos a tad seriously. I mean, even more seriously than I do. I uncovered a fan base of epic proportions. This one girl drew a sketch of what she thinks these 4 ninjas LEGOS would look like AS HUMANS. 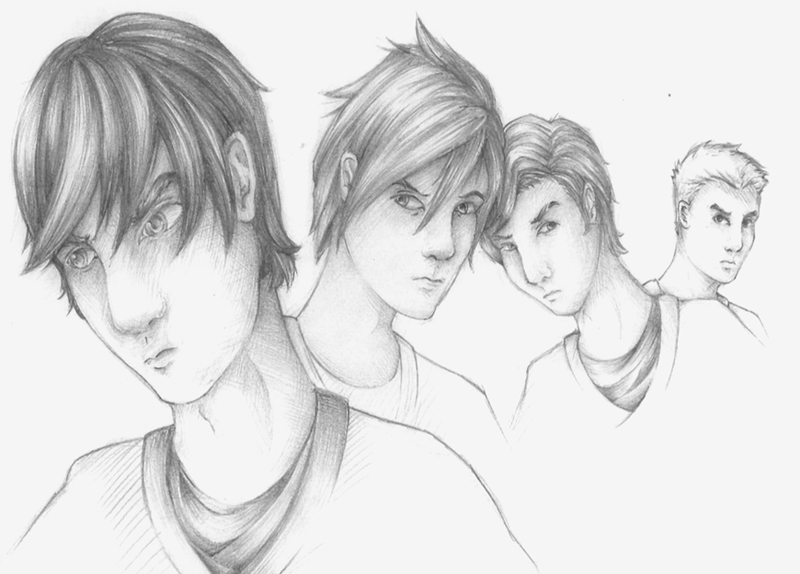 These are LEY-GOS, girlie. Not the cast of Twilight.

So basically this girl wants to marry the ninja LEGO Cole. I think I need to get online and explain to these girls how things work....eh maybe not.

I think I'm just gonna stick to watching the little Ninjago movies with the boys, and playing Legos with them.

More evidences. I opened my freezer and saw a purple bowl of water with Ninjago legos inside. 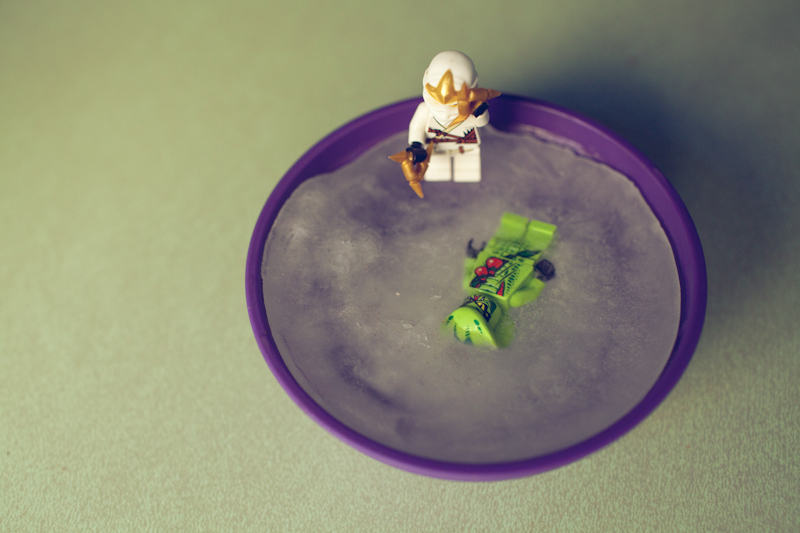 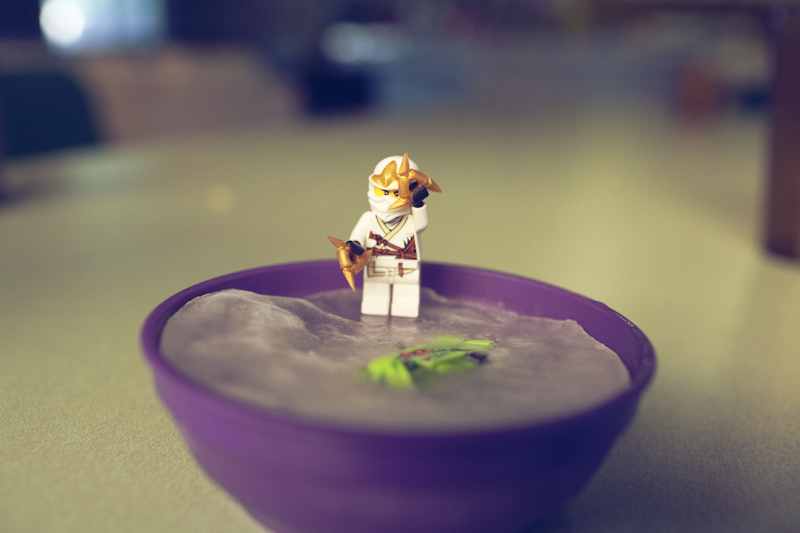 Ninja Zane, master of ice, is freezing his enemy, the serpent. Obviously.

Scattered on the desk are some of Finn's paintings of "spinjitzus". He kinda copied them from a picture as he painted, but I still think they are cute. 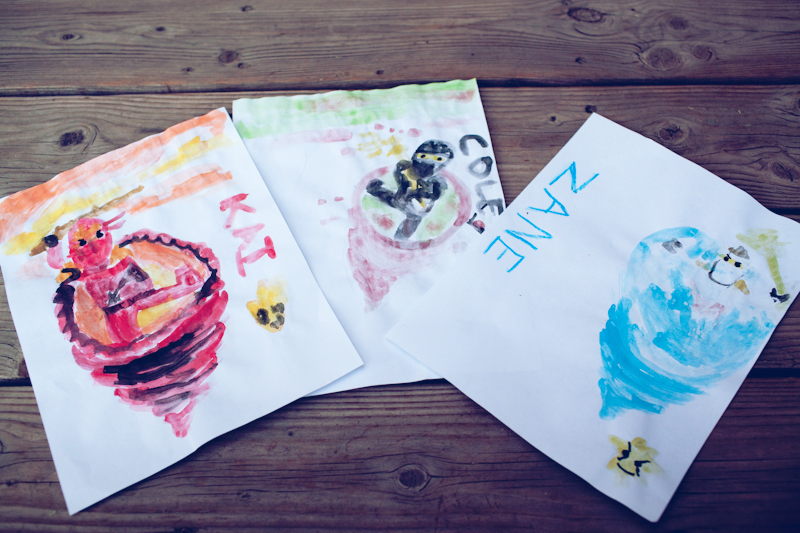 Ok, it's not all about Ninjago. There are other things around our house. Major things. Like evidences of the BIG people that live here too.

Like John thinks he's going to grow an avacado tree from this pit. This has been staring at my face every time I wash dishes. I think it's only fair that you have to look at it too. 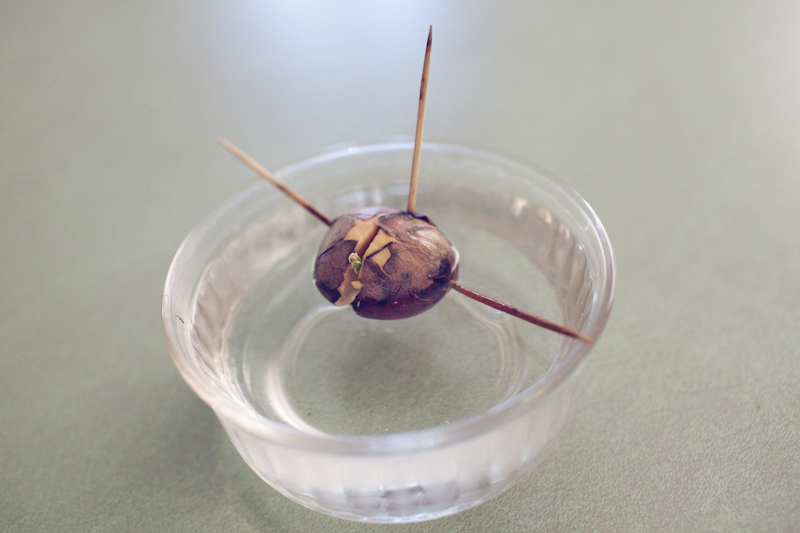 It takes 7 years for an avocado tree to bear fruit. So check back in with us in 7 years, ok?

And evidence that I do indeed live in this house full of boys. 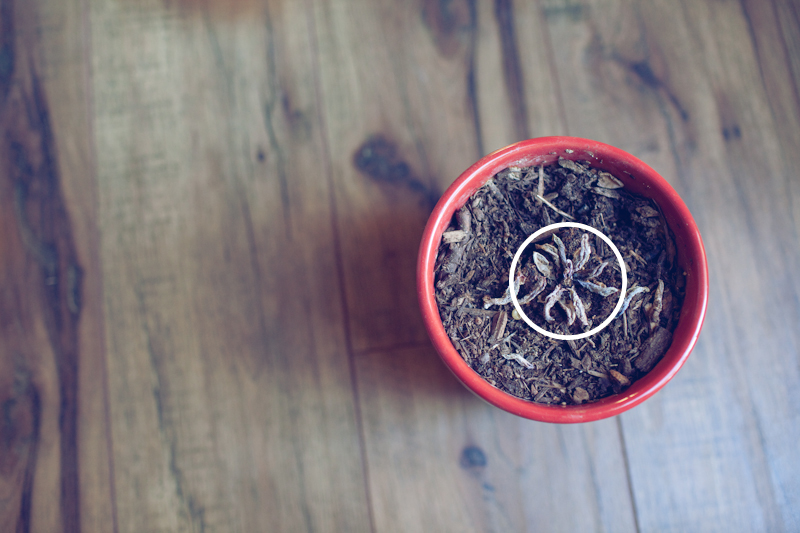 Here is a picture of a cute dinner that I made for the boys in my house. Yes, I'm totally bragging about finally making something other than macncheese. Shameful. 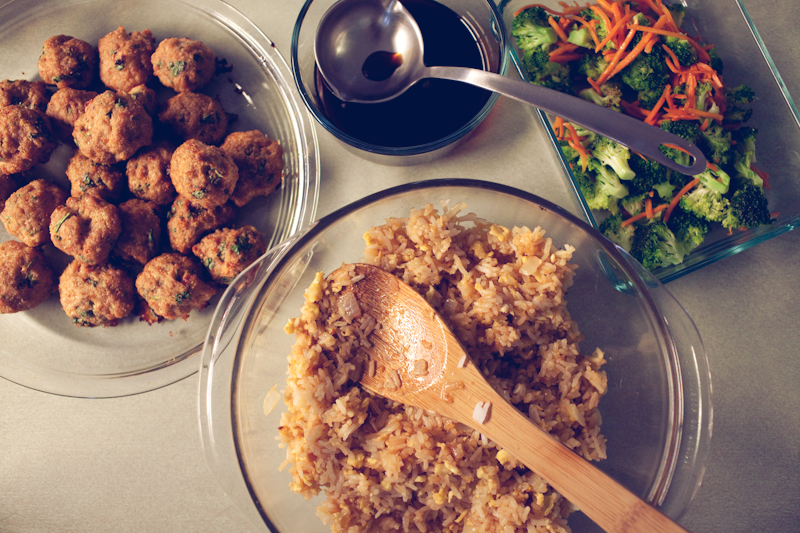 I think boys like cute food. What do you think?

And finally. I'm very excited about this mini-lipstick I won from my Sephora rewards card this weekend. It's the black case to the right, for comparison sake, next to a NORMAL case of lipstick. 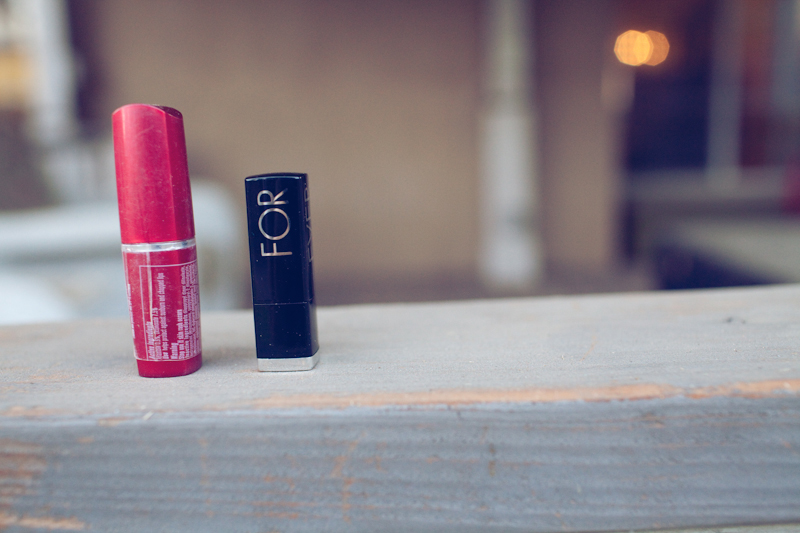 Cute, no? And the color is red. I have always wanted to try red lipstick. Doesn't that seem exciting? The girl at the counter said that "anyone can pull off red". Even you. 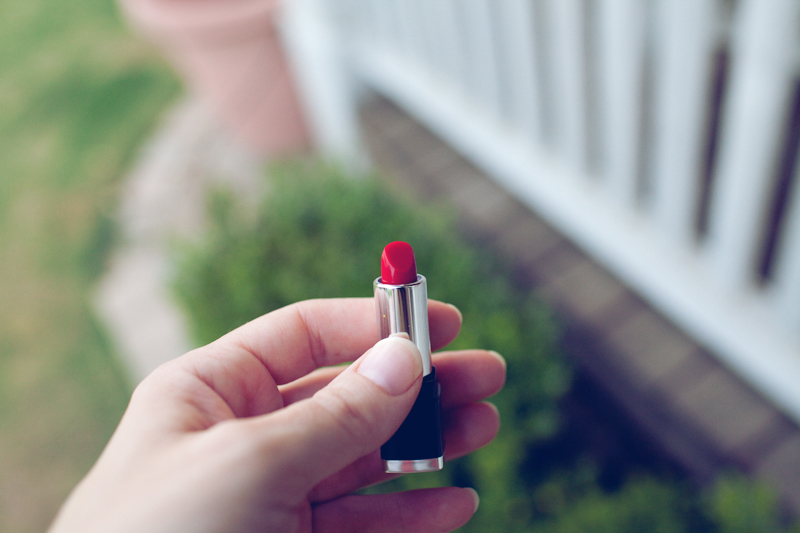 I am so glad that I have spent my money at Sephora all these years, just so that I could finally win this mini-lipstick. So thank you Sephora.

p.s. I hereby crown you masters of Ninjago, after reading this post.
email me! i love you more than broccoli. bandofbrothers