I said I'd never get a cat--part deux

The excitement in this house is electric, I tell you. Electric!

Like Christmas on your Birthday at Disneyland kind of excited. 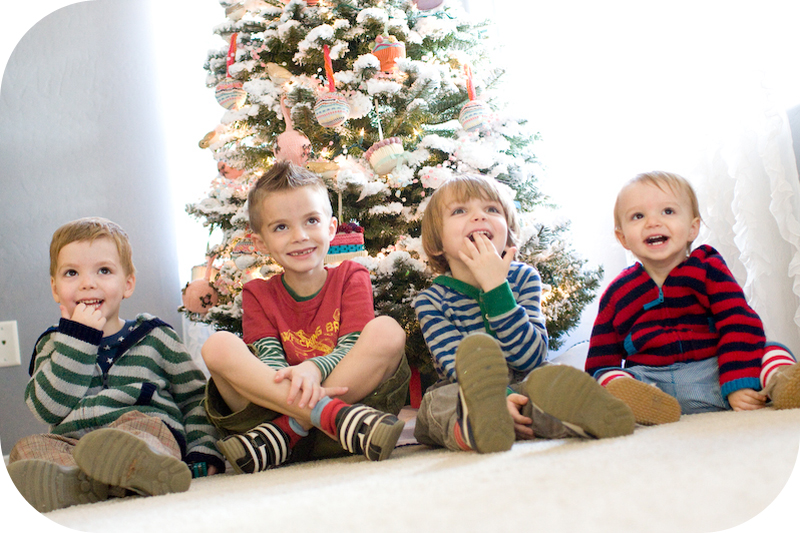 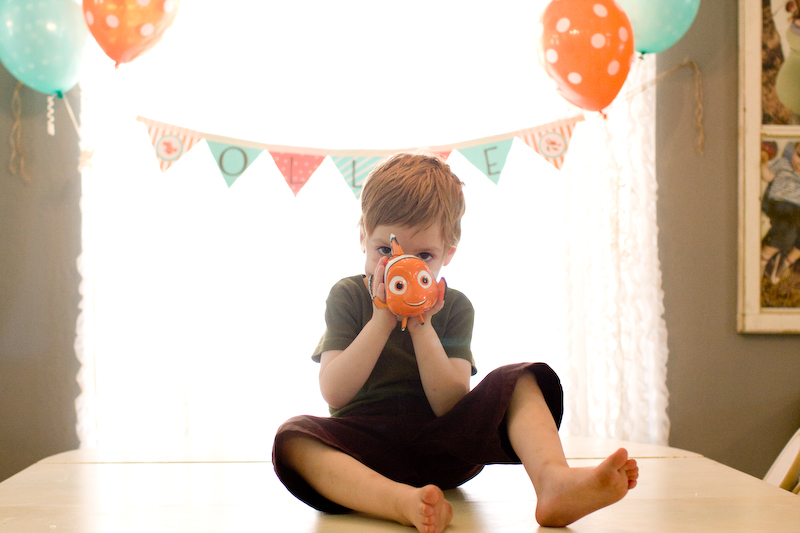 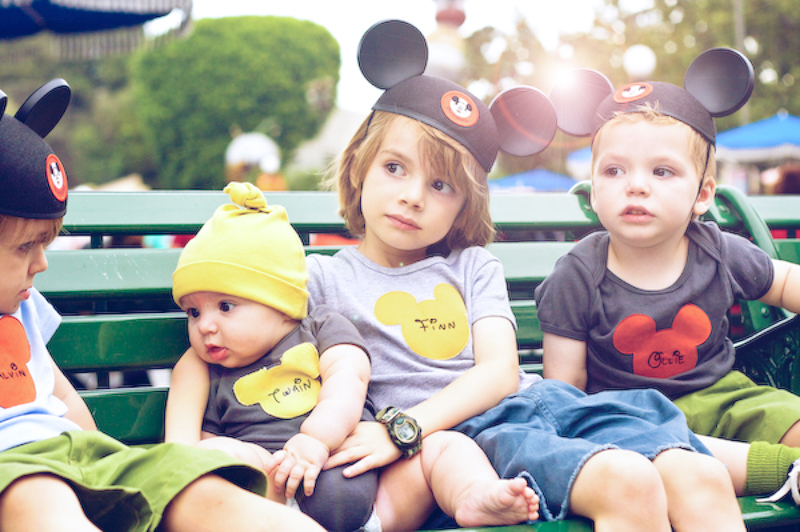 Our one and only family  trip to Disneyland.

What could be the cause of all this commotion?

Only ONE thing could cause such a stir.

Monday night I was at Stbx when I got a text from John.

it read, with a blurry photo of a staggering kitten blob near our back deck.

And no, Peach did not have kittens. She was spayed a while ago.

I thought nothing of it and continued sipping my iced salted caramel frappuccino(cookie crumble frapp is waaaaay better, btw).

"How are we gonna find a home for this critter?", I sighed. And "Who is gonna want that fur ball?", I wondered.

Little did I know the spark that had already started at our back door and was blazing to the neighbor's house.

I walked into Twain and Ollie's room. Twain was up in bed waiting for me to get home, as is his custom. That boy sweats me out, every time I leave. Besides. He was wide awake from the events of the evening.

"We have kitties under our det(deck)" he could barely manage to squeak out. He then proceeded to ramble at top speed about said kitties.

I stepped out our back door, onto the landing of our deck. John sat outside, with a bowl of milk and kibble, of course. 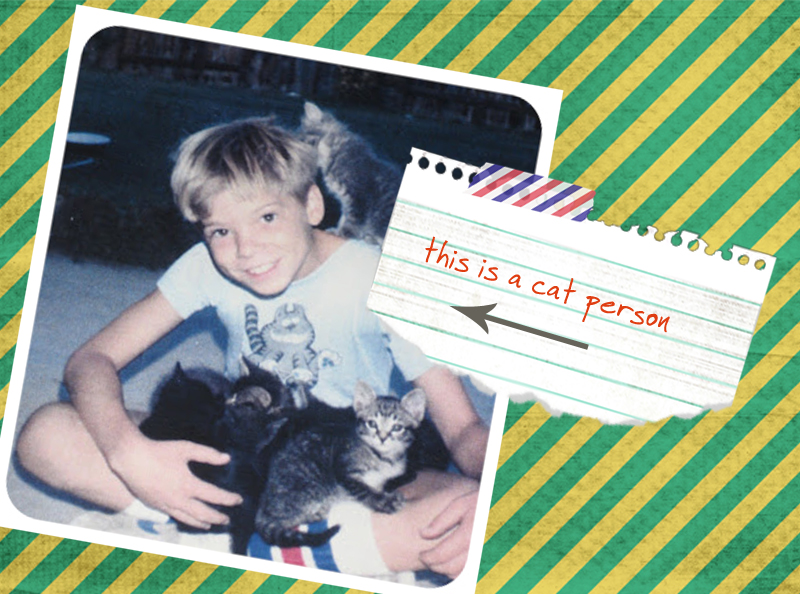 Slowly, a little kitty head began to tentatively and cautiously emerge from under the deck. 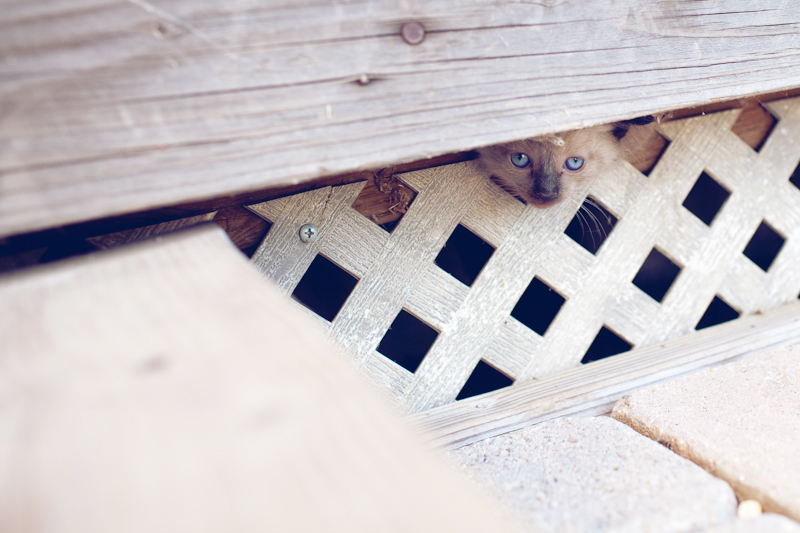 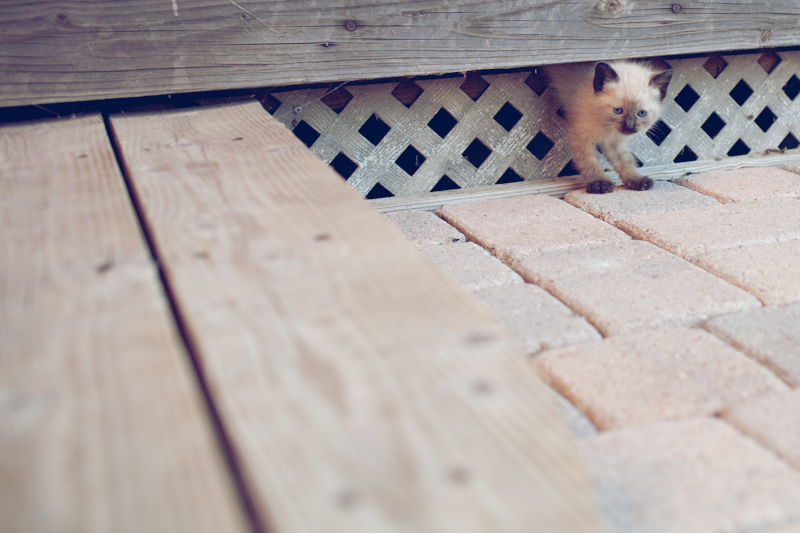 At the first sight of this little Siamese face with pointed ears, I completely lost it and started to squeal in another octave. And baby talk. I vaguely remember lots of incoherent baby talk.

I was in complete and total awe that this striking fancy-pants kitty was under MY cozy deck. How on earth do things like this happen to such ordinary folk as ourselves?


"We must be the chosen ones", I declared.


At this, John is now staring at me like I have horns growing out of my head. "Where is my wife and where did you put her??!!" John demanded.

This is a legitimate question. How on earth did I go from utterly disdaining the idea of having a cat, to begging my husband for another one?" 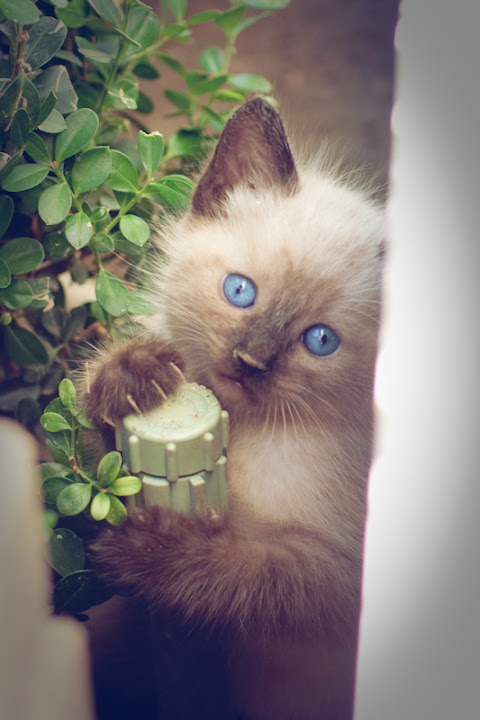 How am I supposed to resist this little face??? And four kitty-crazy little boys??? 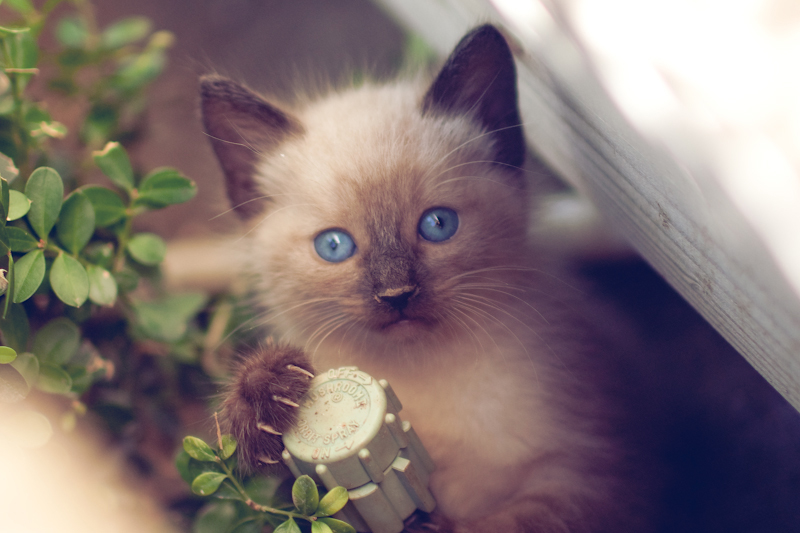 And to think. Just this last post, Ollie was chattering about naming a new kitty when he was 6. Ha. Guess the joke is on me. 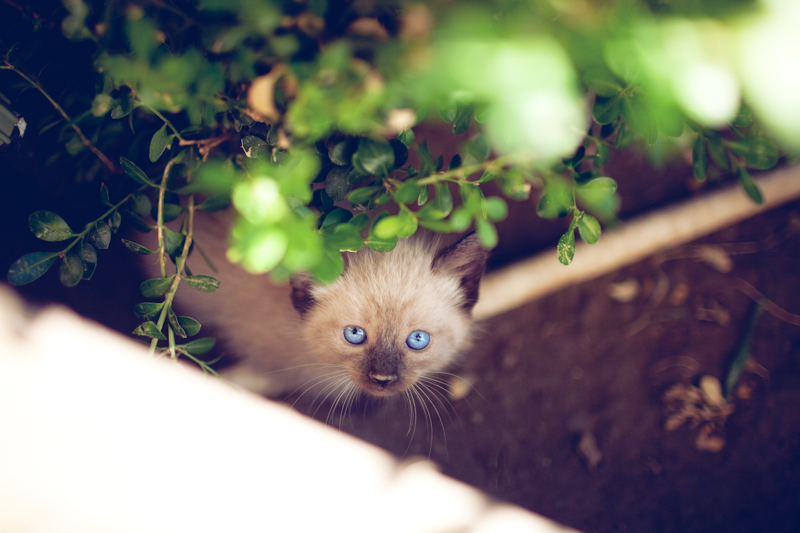 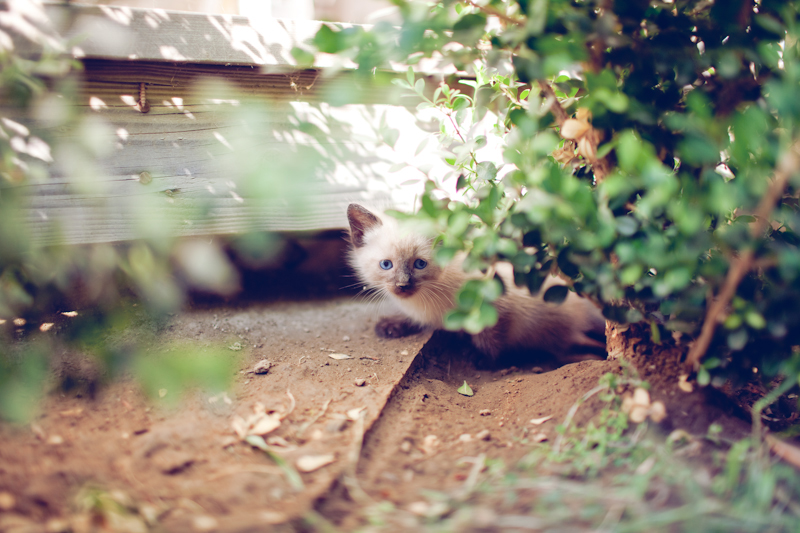 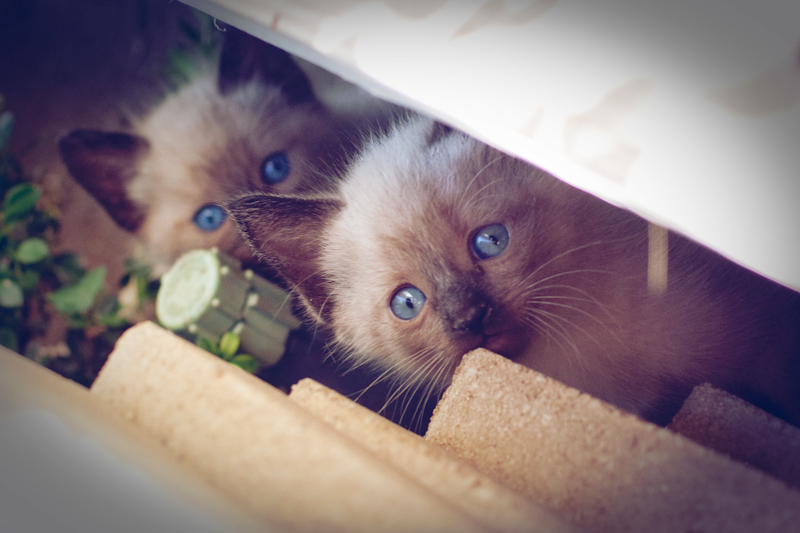 Followed by a solid black kitten. Why hi there, little fellow! 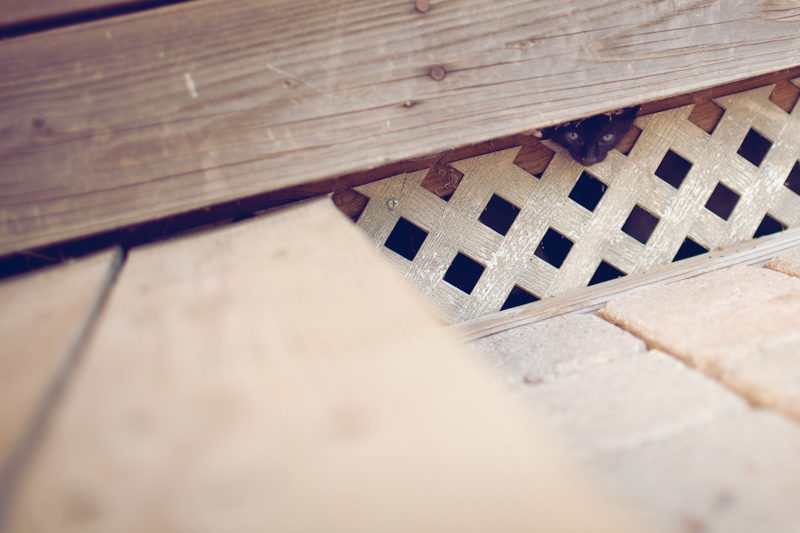 They are still a little skittish, so this footage was incredibly difficult to come by. They kept running away.

Three little kittens. Such a surprise.

Earlier that evening, Libby and Ty were over and went wild over these kitties too. Before long, baby sister Josie and mama Cynthia came over to see what the fuss was all about. Apparently they used to own a cat that looked like these lil Siamese kittens. "They are point cats with point coloring", Cynthia explained. They were as smitten as we were.

I went to bed with a smile on my face over this unexpected turn of events.

It was dark the next morning, and I awoke to Finn's face hovering over my own.

"Mom. Did you know that we have kittens under our deck?" he asked incredulously.

"Why yes!", I answered, popping out of bed and racing Finn to our backyard. Finn was already fussing over food for the kitties. 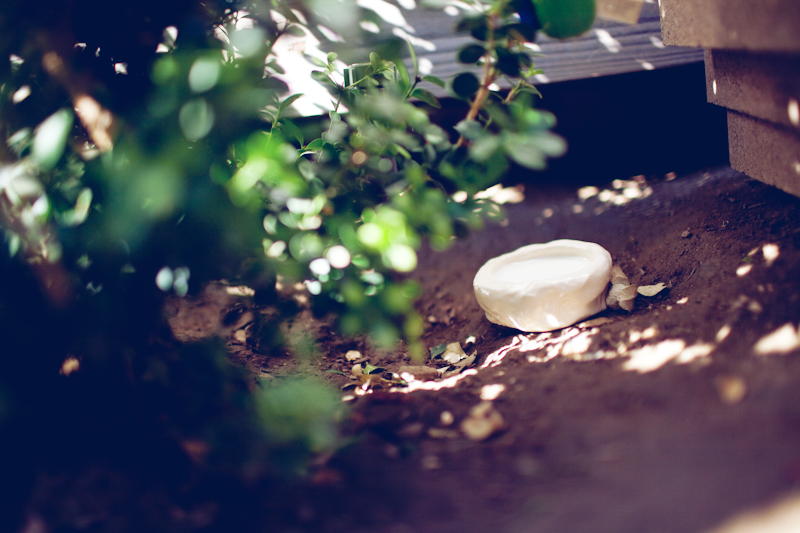 Back inside, Calvin comes up to me breathlessly. "Mommy. Did you know we have kittens?", he asked with stars in his huge brown eyes.

He nodded his head and could scarcely say another word from the sheer thrill of the anticipation of the excitement.

We bundled into the van, chattering nonstop about kitties, on our way to school.

But back at home, the biggest {little} surprise of all was waiting for me under the deck...

To be cont.
email me! i love you more than broccoli. bandofbrothers