I got home from dropping Finn and Calvin off at school. I went straight to my back door,
stopped,
and did a double take. 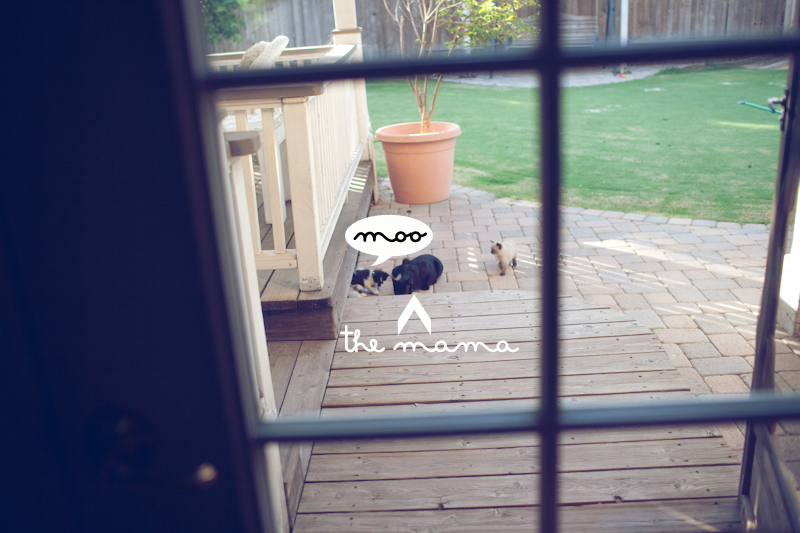 So many thoughts swirling around my head.

1. Up to this point I had never seen the mama cat. It's the black cat in the middle there. The cat that I had always thought was a boy cat... that I was always chasing out of my yard because I thought he'd knock up Peach before she was spayed. Guess I did not have to worry about that.

2. How on earth does one dominant-colored cat give birth to such varied offspring? Cat genetics MUST be different than human genetics, is all I can say about that.

3. The biggest surprise of all was the presence of the FOURTH kitten. I thought there was only THREE.

4. Best of all, the FOURTH kitten looks like a little moo cow with its black and white pattern! Hahahahahahaha. God is SO funny to make such an odd looking little kitty!

I gently opened the door to say "oh hai" to mama cat and she was none to pleased.

"HISSSSSSSSSSSSSSSS" she spat at me and ran away, causing her little kittens to flee as well. 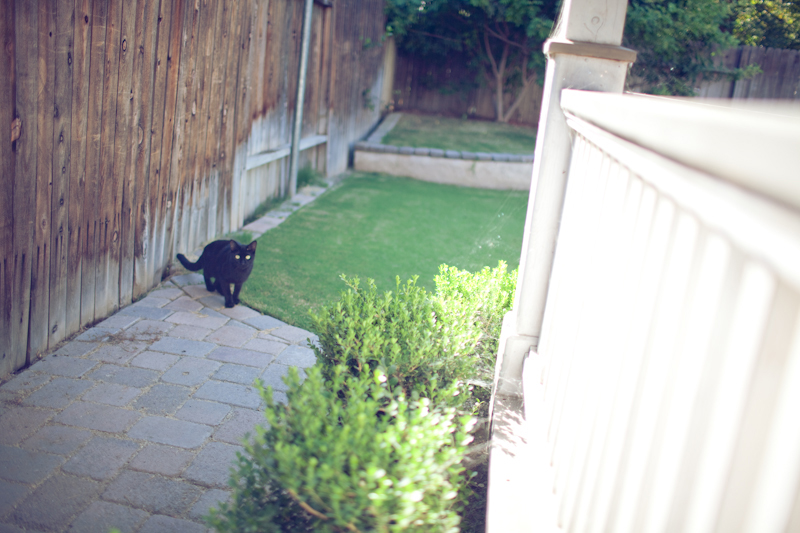 Girlfriend looks pretty good for just having 4 kids. But the hissing? It's just rude. Like she thinks I'm gonna take her babies and run or something. It's not like I had homes picked out for them or anything. I mean, that did not happen til at least an hour later, haha.

I really wanted a closer look at the 4th kitten, but I had to take Ollie and little neighbor Paulie to preschool.

Back in the van, the chatter of kitties continues.

Ollie says to Paulie "Guess what? We have kittens. And Peach is one of the mommies!"

Oh wow. We have some 'splainin' to do. Haha. Peach--ONE of the mommies.

10-year-old neighbor Jordan asked his mama "Is Peach the mommy?"  and "Is Skittle the daddy?"

So much discussion, this little sitch has brought about. Inquiring minds want to know.

We are pretty sure that the papa(at least one of the papas) was the boy Siamese cat up the street. Since cats can drop eggs over a span of days, it is likely there was more than one papa.

Look at me showing off my newfound cat knowledge. It's shameless.

Back at the home front, neighbor Cynthia wants to take another look at the Siamese kitty. But kitties would NOT come out and play. A little while later, she was on her waterfall, trying to sneak a pic of the kitties with her zoom lens. "Silly kitties and silly people", she texted, laughing.

And later her teenage daughter Brynn came over to look at the Siamese. She wants one, pretty bad. And Libby could barely sleep the night before because she was so excited about it.

I was determined to get a closer look at 'moo-kitty'. 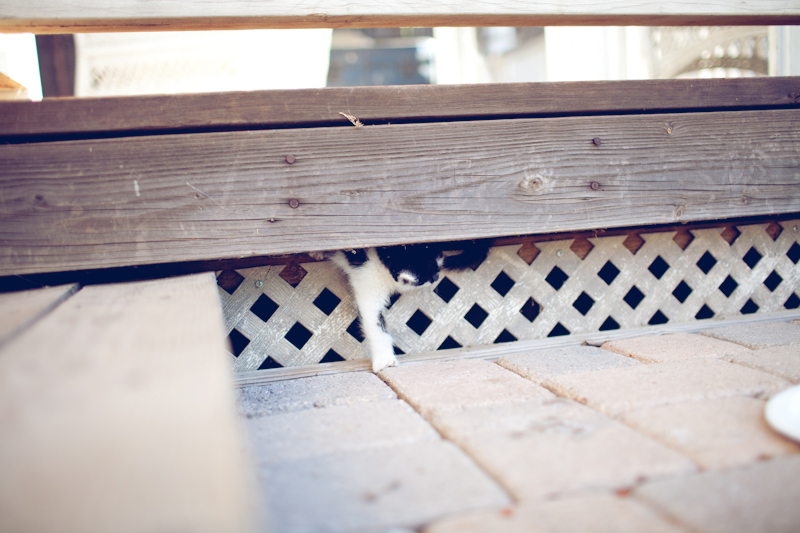 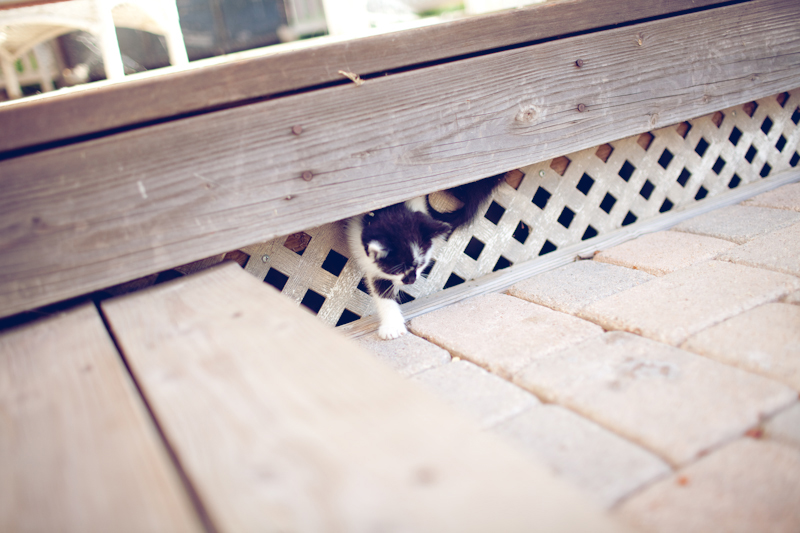 And then back he went, disappearing under the deck again.

And peeking out again. Awwww. Not to worry. Will ya take a look at this sweet lil moo face? 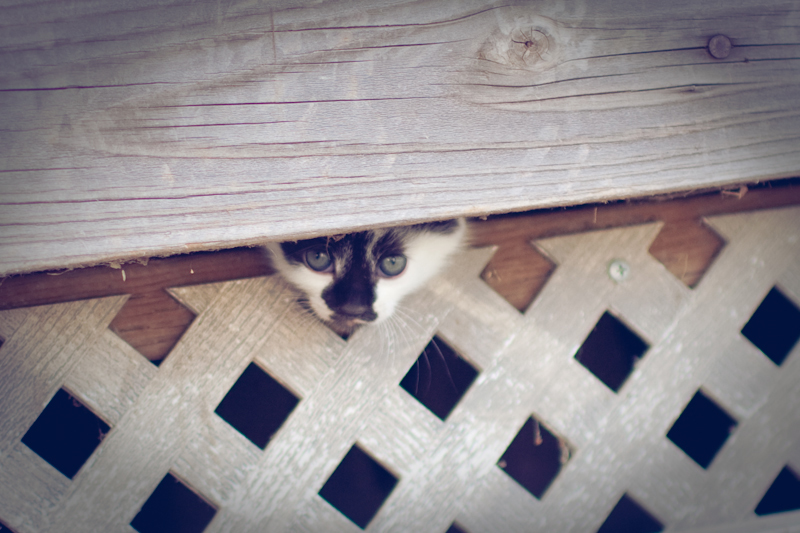 A little while later, mama was busy eating our food(yourwelcome Miss Hiss) and her little ones came tumbling out to have a lil fun. It's ridiculously cute watching them prance all over the deck. When they saw me, they were a bit apprehensive and so it took me a little while to sneak a few more shots.

I am seriously dying from little moo. 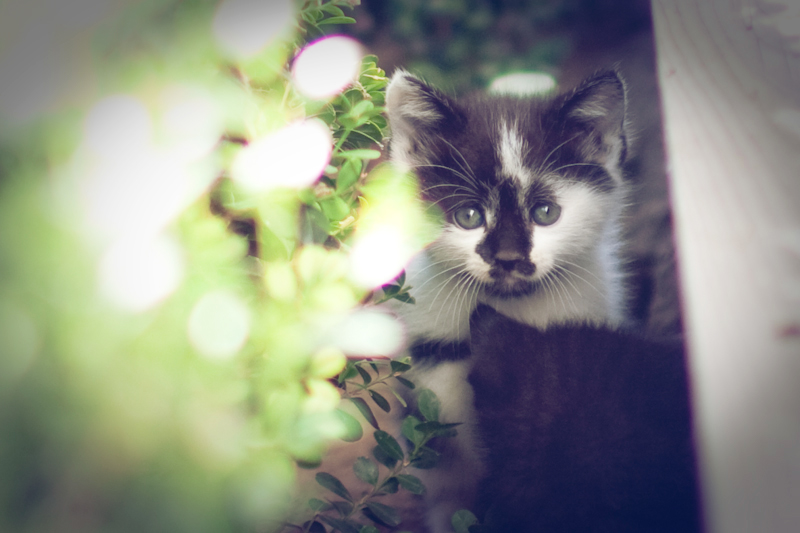 John calls him Chewbacca. Because "vaca"(pronounced baca in spanish) means "cow". And he is pretty furry like Chewbacca.

I personally think he looks more like an ewok. 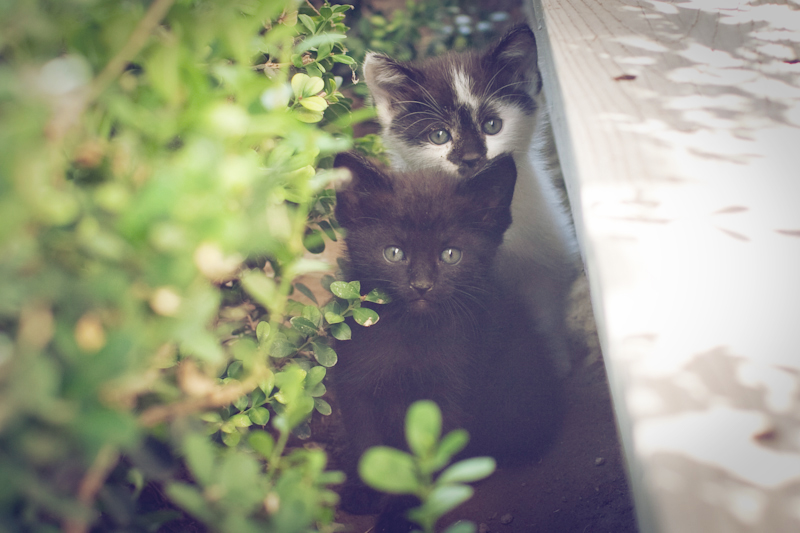 So here's the scoop. 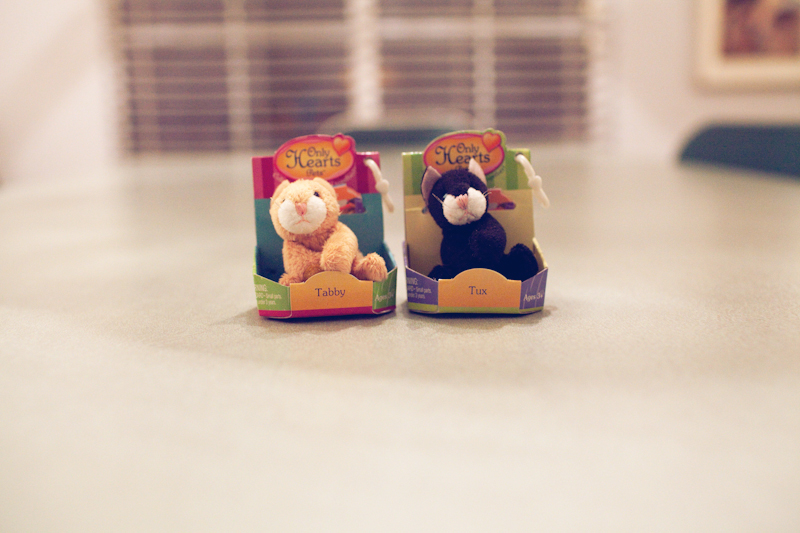 The neighbors want the other Siamese kitty. Well, the neighbor kids want it.
My mom will take the black kitty and is willing to take moo-kitty to dad's work.

And I am TORN. John says we can only pick one new kitty. One the one hand, the Siamese will grow into a beautiful cat. And the Siamese are thus far the most friendly of the bunch of kitties. They always want to play with me. We have a little bond.

Moo-kitty is so wonderfully quirky and odd. How can I resist his strange ewok charms? I'm fascinated by him. He has a lot of character.

How am I supposed to choose between these two faces? Hm? Hm? You tell me. And no, flushing them all down the toilet is not an option. {Ahem} You know who you are. 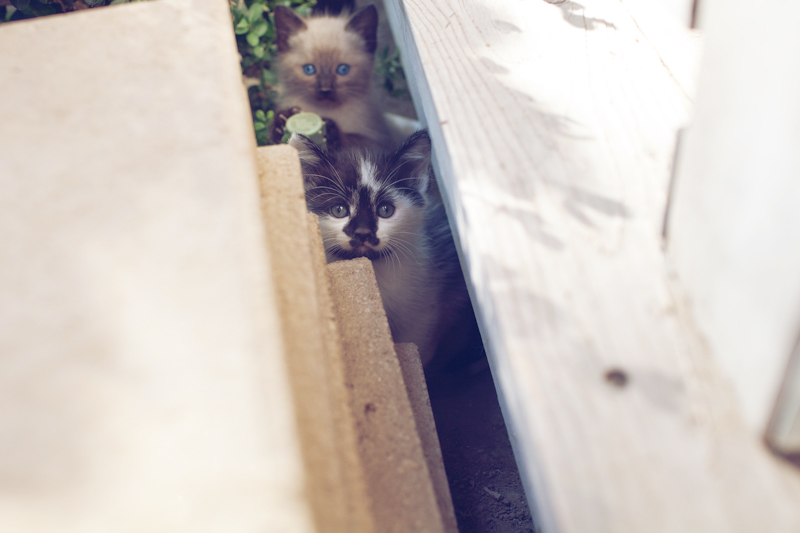 I predict heart break either way. So much for being "the chosen ones", ha.
email me! i love you more than broccoli. bandofbrothers