In case you hadn't noticed, I kind of stink at throwing kid birthday parties. I really did attempt to think about throwing Ollie a little pj party/breakfast but things were hectic with Finn's birthday, Father's Day and my sinus infection. Maybe I can still attempt a little something next week, but until that transpires, Ollie's birthday was a total bust. Not that he noticed. We sang him happy birthday over a graham cracker for Pete's sake. Then we gave him one present from Finn and Calvin: a retro Fisher Price Musical Teaching Clock. 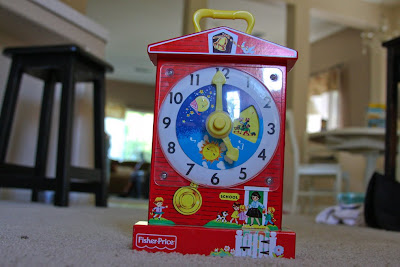 I found it at Target. When you turn the back dial it plays one song. No bells or whistles. I complained to John that this clock doesn't ring or ding or do much of anything at all. He had to remind me that it was a retro clock, without all the digital hoopla. It took me a minute to actually adjust to the simplicity of it. And it think it will be very useful for teaching both Finn and I to tell time on a clock with hands:)

Even though there wasn't the excitement of an actual party, we did have the joy of watching Ollie learn to walk. On Father's Day, John and I were commenting on how Ollie did not seem too interested in walking. Other than a step or two, he would rather crawl. No sooner did the words leave our mouths and Ollie proceeded to walk between 8 and 10 steps down the hallway. And though he still likes to crawl a lot, every day he seems more and more interested in walking. He now makes several attempts throughout the entire day. He falls a lot, but overall, I think Ollie is on his way. And now, the drunken baby walk: