The firework frenzy started last week when our friend "Mr. Rob" set off a surprise firework in the middle of the street. I jumped, everyone jumped and then all the small kids started wailing. It was actually quite comical. Except for poor Calvin, who suffered quite the shock, and could barely squeak out his gulping sobs "ih,ih,ih..."

For the rest of the night, the boys could talk of nothing else. Calvin said "sometimes fireworks are quiet", meaning "usually they are quiet, but this one time they were REALLY loud".

That night Calvin woke up at 11 o'clock, screaming hysterically, "it's too loud!".

"Grr on Rob. He's giving my kid nightmares", I grumbled. I could only calm Calvin down with Veggie Tales.

The next night, there was an official fireworks show just across the way, and we could hear it from our house. John had to pry a sobbing Calvin off the hallway floor, so he could peek at them from the front window. Since the fireworks were muffled, Calvin grew more confident and before long, he was as obsessed as Finn was.

Everything in sight had the potential to be fireworks. Even the weeds outside shouted "fireworks!" 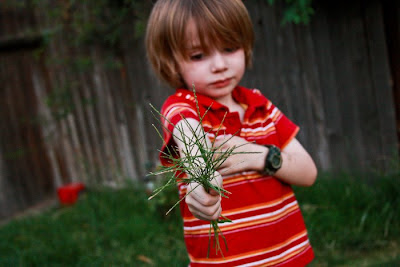 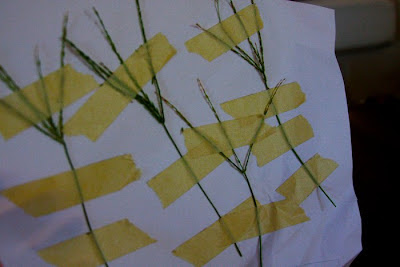 When I heard Finn mumbling "pyrotechnics" in the front living room, I just had to see what was going on: 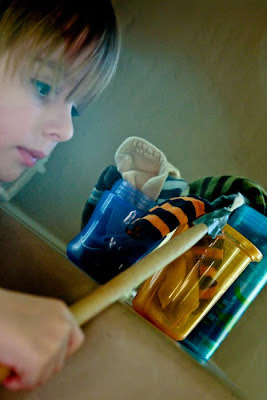 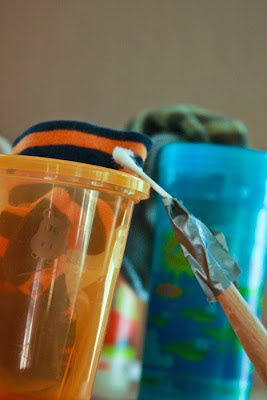 Gotta love the Q-tip lighter!
(and I think the orange sippy belongs to Henry)

And then things started getting out of control. They raided the bread drawer. 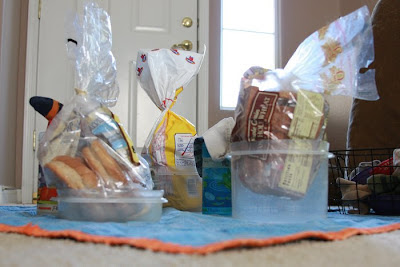 After John banned the bread bags as illegal fireworks, the blocks became runner-ups: 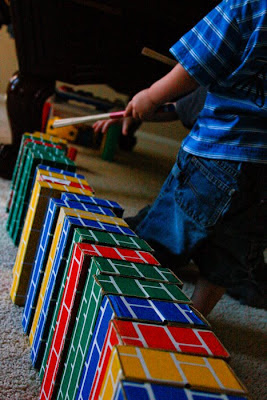 When the long-awaited 4th of July finally came around, I thought the boys would have front-row seats at the fireworks show at our friend's house. Not so. Oddly enough, Finn did not even want to leave their backyard to see the show out front.

He would rather sit as one small lone boy, all by himself in their Big backyard.

My mom and John finally convinced him to join the show, where he insisted on sitting in the back row on my mom's lap. He was skittish and jumped with every boom and bang. He wouldn't even use his sparkler, so we had to save it for a later date. 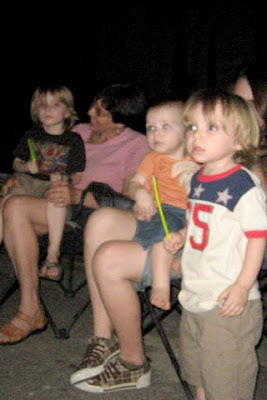 And Calvin? Not scared at all. Go figure.

And my fussy-funnel Ollie? Was content as he's ever been. It was definitely bizarro world. Could Ollie's grin be any cheezier???

The next morning Finn woke up saying "I had a lot of fun watching the fireworks yesterday" and "the fireworks were in a can" and on and on with every detail.
And tonight, when all the dust settled, John busted out Finn's sparkler. The timing was perfect. Finn was finally able to relax and enjoy a real firework! 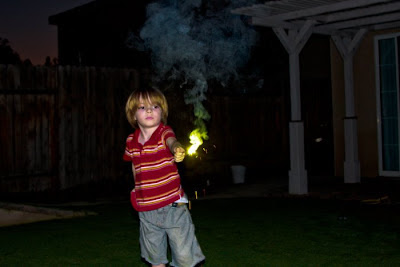