on why I'm willing to act awkward and don't take myself too seriously.

Initially I was not going to write this post because I did not want you to think I was trying to get a pat on the back. However, if anything, it will just show you how awkward I can be;)

I was inspired by Mr. Headman Jake and his wife Johanna of Love-Water.org to throw a Bunco fundraiser. They did not personally ask me to do it. It was just a suggestion from a Love-Water brochure on ways to get involved.

One thing you must know about me. I rarely ask people for money. I mean, I can barely ask the grandparents to sponsor my children for a jogathon. I'd rather die. Yes, I'm that proud. And I'm not proud of the fact that I'm that proud.

So even the fact that I was considering hosting a fundraiser is a HUGE departure from the norm for me. Fundraisers are for fancy people who wear suits and drink expensive wine, right?

But something tugged at my heart to do it. I was giddy with excitement whenever I thought about it.

Some of my gal pals were interested in helping me. We had NO idea what to expect or who would want to come. I told myself not to take anything personally. The Lord would bring whomever He wanted there.

I have been involved in a lot of birthday parties and baby showers over the years, which is good and fun...but I felt like it was time to branch out and get the girls together for something different!

First things first. The evite. Turns out, Evite.com and I just do not click.
So I researched my options.
Pingg.com stole my heart. It's just so...pretty. And flexible. And lovely. 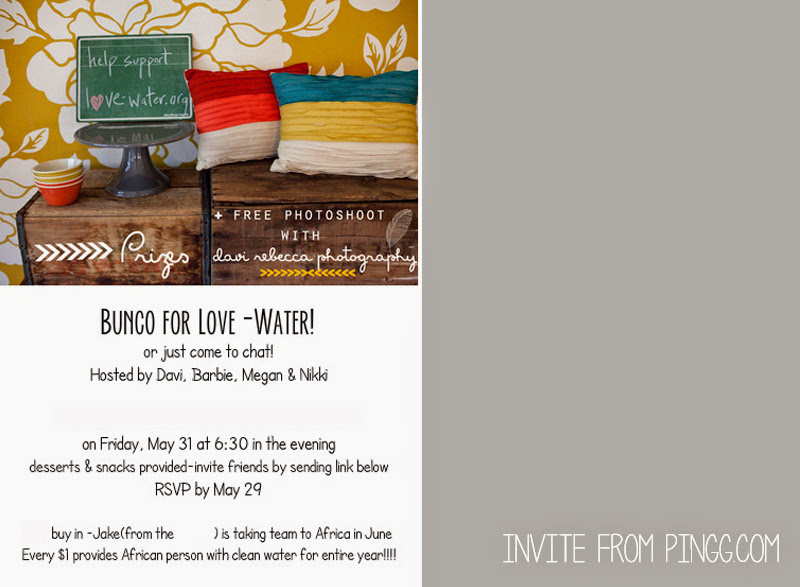 The first day I sent out the Pingg evite, we got some lovely YES rsvps right away, which was great. After that, notsomuch. People were slow to reply. Which made me feel like nerd girl central, LOL. But it's totally understandable--I know I cannot go to every fundraiser.

Oddly, I felt compelled to 'nudge' a few people along...I sincerely just felt like it wouldn't be the same without them and thought they would make a delightful addition. Besides we needed more players;) And here is where I win most awkward Facebook friend award. I think I left a few messages saying something like,

Haha. I am pretty sure I was delirious that day. I felt like I was campaigning for presidency. I was feeling slightly ornery and if someone had told me to "buzz off", I am pretty sure I would have just stuck out my tongue(smirk). I don't take myself too seriously. Turns out, I am completely willing to pimp myself out and act awkward for a great cause like Love-Water! Just thinking of all those kids dying from dirty drinking water propelled me onward ho!

It's always humbling to admit you need people. But funny thing is...I started getting lots of interesting replies like "I was on the fence and felt too scared/awkward/nervous/introverted to come but you pushed me over the edge and I'll come!" It was cool.

I had no idea all the social anxiety involved in these sorts of things! I had some very enlightening discussions with some of my self-proclaimed introverted friends...

Bottom line is. All hail the introverts! They make the best of friends. And now knowing how terrifying it is for them to put themselves out there with a group of people makes me admire them even more.

We were back in business! Hip hip hooray! 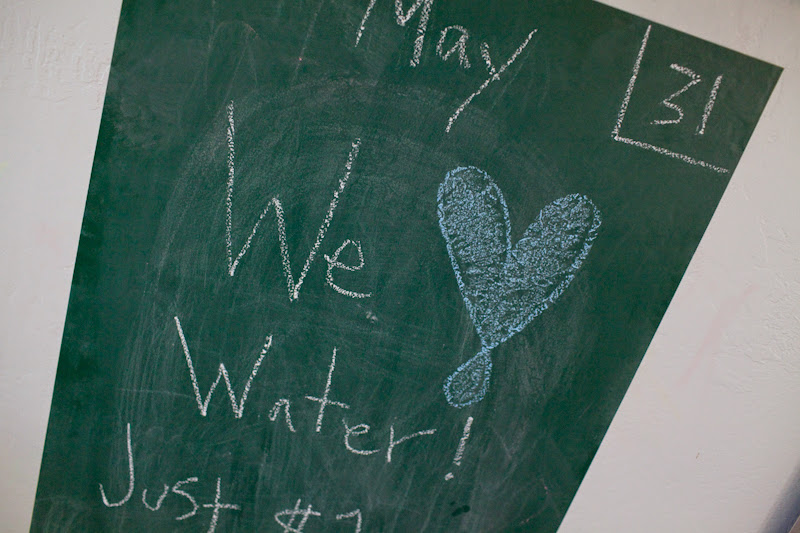 Time to start party planning! We met the week before to shop and divvy up jobs. We did not want to turn this into a "pinterest" style party. But there was still a lively debate about what color straws to use: blue for love-water or grey to go with coral plates. Grey won.

And there was an OCD moment where the tablecloths for card tables HAD to match. Some things just have to be proper-like. Learned it from our mamas;)

Found some long table cloths at target(on sale) and cut/hemmed them in half.

And our folding chairs were not all the same and that made me twitch a little.

My favorite memory is when Megan prayed over us that our heart's intentions would be pure and that our guests would feel so loved, special and wanted. It was not all about the money raised but about the people.

I was SO intimidated to make these salted caramel butter bars. Because I'm a kitchen klutz.

Turns out they are fairly simple. Even for me. SO yummy. And healthy(wink).

My favorite item of the night was Pioneer Woman's Iced Coffee, made by our very own Megan. She rocked it. I mean, you have to brew the coffee cold and it involves straining with cheese cloth folks. That is dedication.

Hostess bunco babes: Barbie, Nikki and Megan. Some of the dearest souls I know.

Giving a little shpeel in the beginning. Even showed the love-water video. John transferred the utube to DVD. Thanks honey!

We did a little card.

One of my other fav parts. When Barbie told her 6-year-old daughter Aubrey about the fundraiser for love-water, Aubrey asked if she could give $3 of her own money! How sweet is that??!!

When we showed my boys the video, they just sat there, listless. Apparently they have hearts of stone. So we explained about oh, kids DYING from dirty drinking water,  and suddenly they all wanted to give money too. And sign the card. Even lil Tweeds.

Barbie was in charge of the bunco officiating and did a fabulous job being peppy and friendly! She said bunco was like speed-dating for women, haaaaaa.

We ended up having such.a.blast. The girls who came were seriously some of my favorite people on the planet. So sincere, down-to-earth and fun. Words can't explain. You just have to meet their shining faces.

So many people ended up staying and chatting really late. It was good for the soul. Two girls even stayed up chatting with me til 2:30 am. You know who you are;) We hadn't stayed up that late since our midnight toilet plunging job at Hume...

I'm still smiling. And giving God all the credit for making this happen. I'd way rather take a chance and bomb in a blaze of glory than sit safely on the sidelines. How about you?
email me! i love you more than broccoli. bandofbrothers