Here is the randomness that makes up my life these days.
I was talking to my sister on the phone the other day, asking her "how on earth did little Ansley find the scissors to cut off her pigtails????", when Ollie was in the other room doing this: 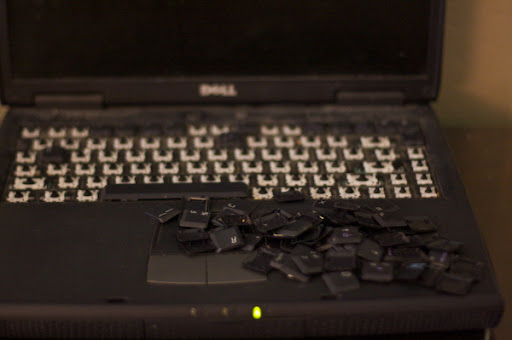 He pretty much dismantled the keyboard. His brothers don't call him "trouby" for nothing. That's what I get for talking on the phone, I guess. John says it will take 3 minutes per key to fix. We thought it would be a funny joke to put all of the keys back in the wrong place when someone came over to use it.
Then the other night I was on the phone with my sister(again) when my neighbor's aggressive shar pei dog sauntered right through my bedroom door and started walking around my bedroom. It totally freaked me out. I am scared to death of dogs.
I was chased as a child. They sense fear, you know.
This same dog has escaped on several occasions. He once lunged at John and tried to bite him in OUR garage. So there I was, panicking, standing up on my bed, and the dog starts to walk out into the living where my 3 darlings are watching a movie.
Things could have been really bad. And ugly.
But thankfully, the dog turned around and walked back out the door. I was hollering at John, trying to warn him of the impending doom, but he did not hear me. He found the dog and escorted him back to our neighbors, who were very apologetic. They still have no idea that their dog was in OUR house. I am working up the nerve to tell them. Oh it's going to be so awkward.
And last night it was soooo hot, that I opened up my front door for some cool air. You would think I would have learned my lesson by now--Keep all doors closed. As I was locking up the house for the night, I heard some clanging in the front living room.
"Someone is in our living room trying to murder us", I told John, matter of factly.
A few minutes later, John was chasing down our latest intruder--a frog had snuck in the front door when I was not looking. It peed on our floor. So gross.
So between dogs and frogs, I am DEFINITELY keeping all doors closed from now on.
The other big excitement from last night was that I sold my old Petunia Pickle Bottom diaper bag on ebay last night! The last 20 seconds were absolutely thrilling. I frequently buy things on ebay, but rarely sell stuff. So I had no idea of the rush on the flip side of the table. I kept shouting to Finny every time the dollar amount rose.
I actually just ordered a new Skip*Hop diaper bag yesterday. It may not be a fancy shmancy Petunia, but it was on sale for around $40. And I LOVE it. It's just me. It is burnt sienna, corduroy. 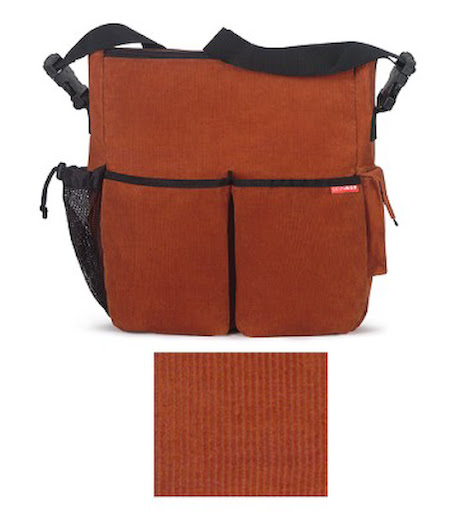 The only thing that bothers me is the black color of the straps and accents.
It absolutely BEFUDDLES me that these professional designers don't have a clue. They should have made the straps grey. But for the price, I am ok with it.
I plan to embroider some mushrooms on one of the front pockets. If possible.
Have I mentioned my obsession with mushrooms?
Well, I love them. And I love to eat them too. Which is odd, since I scream bloody murder at the sight of mold...especially on food.
And I was delighted when new mommy Alisha permitted me to embroider some mushrooms on the blanky I was making for her little Zoe. 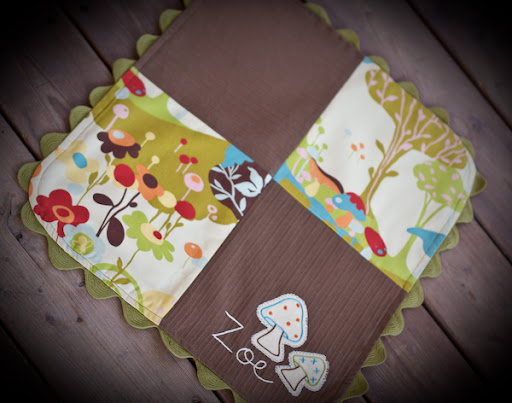 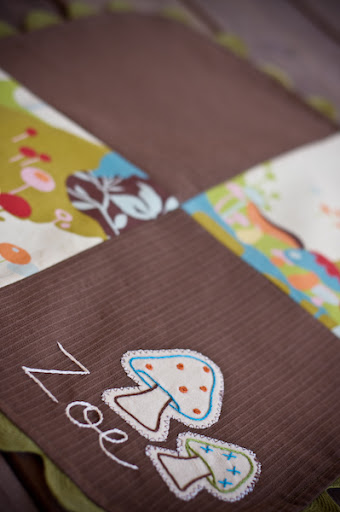 I'm so excited for Kurt and Alisha on their new bundle!
And excited that my baby will have a little friend. Speaking of which, I am having lots of braxton hicks and tightening. Lots. But nothing overly consistent. I am just praying that I make it to my scheduled date. Thankfully, I squeezed in my maternity shots with Lorie on sunday evening. When her hubby Scott saw me, he asked "why are you sticking your stomach out?"
Um, thanks pal.
So while Lorie is AMAZING, she definitely had her work cut out for her. And because I know her so well, I was obnoxiously interfering with her work. And I had no idea how to "rock the hip"(It's a pose). Do girls learn that in high school, along with curling hair and applying make-up? I was too busy with the geek squad, so I am at a disadvantage here.
And despite my inability to pose, or runaway Ollie or napless GeGe, I had lots of fun. I will post those when Lorie has time to deal with them. She is quite in demand and has lots of editing ahead of me. And she has given me veto powers and has promised not to post anything without me seeing them first, riii-iiight, Lor??? Ok. I feel better now. I am so not a control freak.
email me! i love you more than broccoli. bandofbrothers