I've never been a huge fan of Valentines Day. Maybe because you're supposed(forced) to get things for each other...seems kind of contrived. Why do I just get candy on that particular day? What about the remaining 364 days? I think mainly I don't like it for grown-ups. It's so depressing watching clueless men shopping for teddy bears and lotions for their poor unsuspecting victims. It is kind of cute for kids though. My sister's girls make a pink heart-shaped cake for daddy and I think that's very sweet.

I was lost in thought yesterday, reading the story of Chris and Emery(I'm probably the last blogger on earth to have read it. Where have I been?), while Finn was dancing around peppering me with questions. He was supposed to be observing his afternoon siesta, but somehow slipped under the radar. As I read on, Finn was chattering endlessly, happily playing with strands of paper from the shredder. He came over and plopped something on my desk. A heart? For me? So sweet. 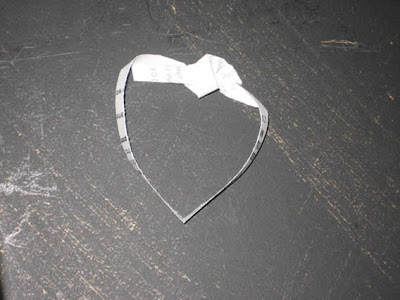 heart crafted from shredded paper.
In his extreme excited voice, he said, "I'll be right back" and he danced out of the room. A few moments later, he re-surfaced and handed me a paper bag with the word "mome"(mommy) inscribed on it in pink crayon. 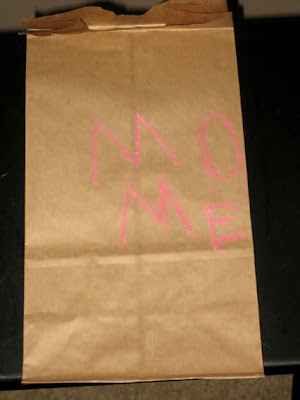 I opened the bag to find a white sheet of paper with pink hearts all over it. 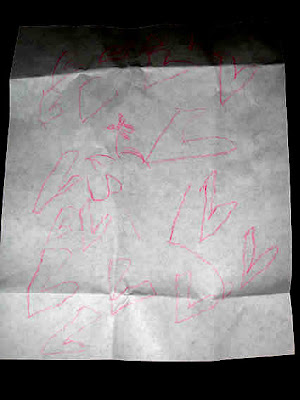 Aww. Finn can be so sweet when he's not being aloof. This was totally unexpected. I was mystified as to where he learned to draw hearts, as he's very preoccupied by his daily drum and firework drawings. He must have learned to draw hearts at church, I thought. So, I probed and heard what ever mother longs to hear:
"I learned it on TV....all the shapes and hearts on Barney."
Well the heart pictures went over so well with me, that he quickly went to work drawing me another picture: 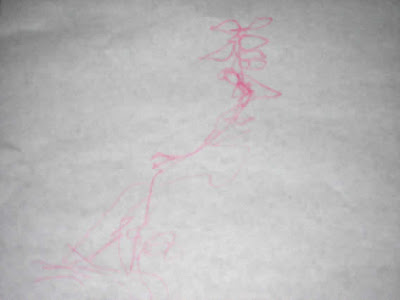 Let's just say my sister Jessica has the artist in the family.
Not wanting to hurt Finn's feelings, I said, "Oh, those are lovely pink...things..." He heartily agreed and said "yah, it's those flower things over there".
This is my kind of Valentine's Day.
email me! i love you more than broccoli. bandofbrothers