I am Pippi Longstocking...

Ollie got his 1st real cold this week and my bundle of joy turned into quite the sad-sack. At the mere hint of the mention of the possibility that I might put him down, he would start screaming bloody murder. Then he would get all blubbery & raspy & pitiful...a little eeping pile that I could not resist. Even though I was at my wits end, I was still thankful to be able to take care of him. But taking care of the boys all day, and even nurse Davi has her limits. Since I was out the night before, John and I jointly(and ridiculously) decided that he go to small group that night and leave me home with the 3 boys. After lugging my almost-20-pound baby around all day, my arms started to ache. Surprisingly, my scrambled brain thought of a somewhat reasonable plan. I went out to the garage and dragged our stroller into the house. 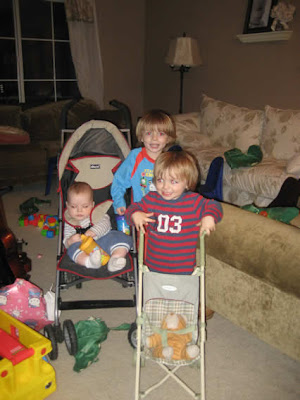 Round and round the living room we went, with the boys and their kitties strolling right along. We were having a jolly time. Then the phone rang and I stopped rolling the baby for 1 second. And the screaming starts again(flashbacks to my sister's post when her Kate fell apart:She dropped her pencil.SCREAM! She dropped her candy. SCREAM! and so on..). At that moment everything went haywire--the boys competing for the biggest melt-down, the house looking like a bomb hit... 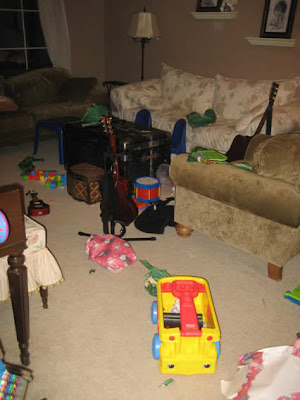 and all I could think was "I'm gonna wake up in the morning and do this all again with no break in sight". I called John(around 5 times) and begged him to come home, ASAP. He peeled out of there, but by the time he got home, the boys were calm and he probably thought I was crying wolf.
My house is still wacky and disheveled, but I don't seem to mind as much as I used to(before kids, when every item had its place or I chucked it). I even dragged Ollie's high chair into my bedroom so we could be with the rest of the family while feeding him. 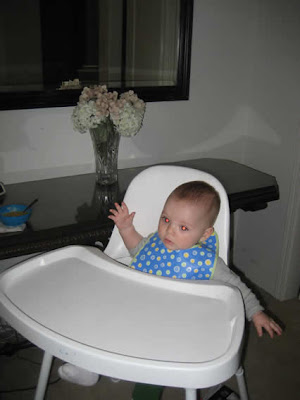 So, with my stroller in the living room and the high chair in my bedroom, I am starting to feel like Pippi Longstocking. Though I think she had a horse on her porch. 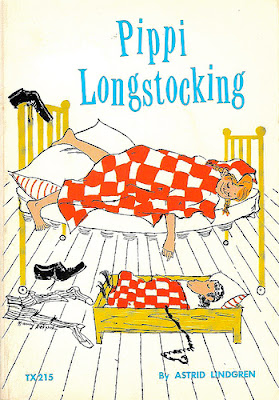 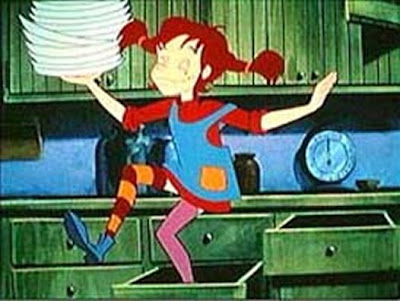