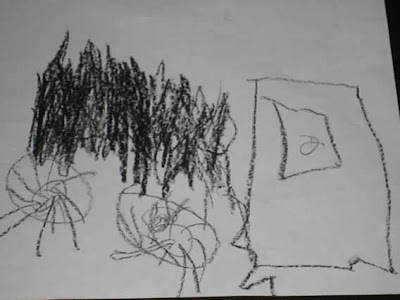 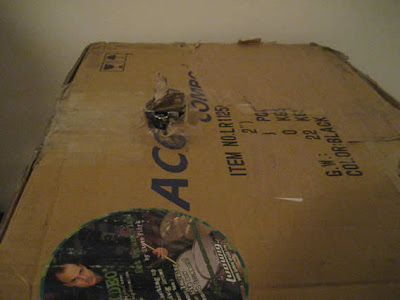 These boxes were delivered to John's parents house, begging to be opened. But, Finn still had $15 to go. People were like "for crying out loud, let me give Finn the rest of the money already" but John was being all strict and said NO.
John's mom set up a "recycle for drums" box at her work too. His dad even set up a jellybelly-for-spare-change dish at his place of employment. I think they REALLY want the drums out of their garage, no? In the meanwhile, the practice sessions at home are becoming more and more militant. I try to clean up their make-shift sets at night, stuffing them into their toy box and the armoir. 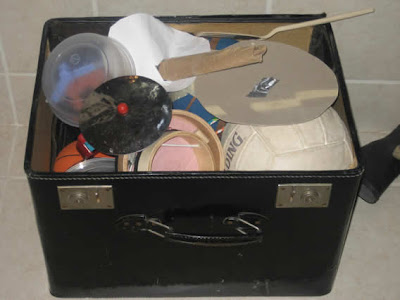 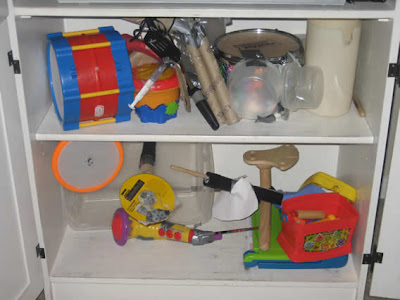 Then, I awake to this remarkably SAME setup every morning. It's pretty amazing how this little set seamlessly and purposefully pops back together after mass demolition the night before. 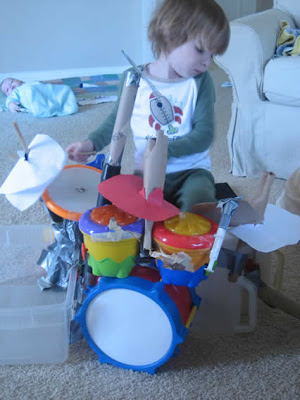 Exorbitant amounts of duct tape sacrificed for the cause.
( note wee baby off to the corner)
One morning they started paractice at 6:15 a.m. and I had to call the cops daddy on them for disturbing the peace.
Last night, Finn finished raising the rest of the money. He did it! This afternoon when I asked him to clear his lunch dishes off the table, he said, " I don't need to do my chores anymore -- I already have enough money for my drums". Oh boy, we had to have a little chat about that.
Tomorrow, John is going to set up Finn's new drum set. I'm feeling rather nostalgic about the end of this era, so I thought I'd better document their little dueling ghetto drum sets together one last time. *caution:lower volume if you are at work*

counting with Tommy
The next time I post, there will be a big black monster of a drumset in my house. I will let you know how I feel about that. So far, I feel a sense of impending doom:)