The other night I was home alone with the boys and it was bedtime. I sent Calvin to go potty because I was in the middle of changing Ollie, who was having a meltdown. Normally I accompany Calvin to the potty, so as soon as I was done with Ollie, I went to check on Calvin. The bathroom door was closed, which was odd. I went to open it and my heart sank when I realized it was locked. My baby had locked himself in the bathroom! I called his name and then heard his muffled little voice on the other end. I almost panicked, but decided that would get me nowhere. Instead I hopped up and grabbed the lame key-thingy they give you. I twiddled and fiddled and tried my best MacGyver, but had no luck whatsoever.

I called Stein and Natasha, who live a little ways down the street. Stein was snoring(yes, snoring) and so Nat and Jenn said they would be right over.

In the meanwhile, Calvin is starting to fuss. I kept putting my fingers under the door and he would hold onto them. I stuck a cracker under the door. Just knowing I had his fingers was enough to keep me calm. I started working on the door again, but had no luck. I tried so hard, and I thought there was noooo waaaay Nat was going to be able to open it. I considered calling the fire department. I had a flashback to when my friend Katie's little girl, Camden, got locked in the bathroom. Do we really need locks on our bathrooms?? Can't we just use little signs that read "occupied"? Calvin started whimpering "I'm sared"(scared), and I started to feel a little ill. 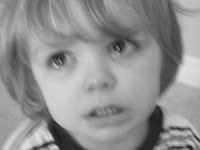 Natasha and Jenn arrived, and in 1 second flat, Nat had the door opened.

Are you kidding me?

I should not have been surprised--Natasha can figure out anything. She is amazing, and I was so grateful. Thank you, thank you Natasha. Apparently there is a little technique--you need to put the key in perfectly straight (not to an angle) and turn left. Good to know.

I hugged Calvin and was never so happy to see my little mop top. Well, that was the talk of the town at our house that night. At bedtime Calvin prayed "thank you Jesus for Miss Natasha that she got me out of the bathroom".

*******************
The next day I was retelling the story to Gretchen and Mike when they stopped by to bring Calvin a splash cymbal. I told them how worried I was that Cavin would fall in the toilet when he locked himself in there. Mike was like, "you really think that could happen?", just as Calvin fell headlong into a cardboard box. 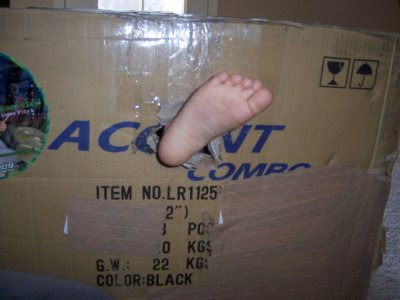 and put his foot through a hole in the box.

Yah, I think I had plenty reason to be concerned.
This is sooo prime example of my Calvin Jack.
email me! i love you more than broccoli. bandofbrothers